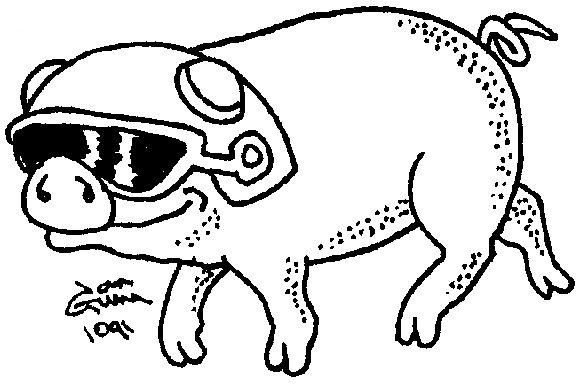 This silly illo by Ian Gunn is labelled “pig helmet”. I can’t help but think it looks like the quintessential movie-motorcycle-cop’s helmet on a pig. Imagine Chips cops but as porkers. This cartoon gives new meaning to the phrase “trotters in the trough” referring to corrupt cops. Also, “bringing home the bacon” could mean bringing a cop home. “Casting your pearls before swine” could refer to a bribe.

OMG. The puns. The dreadful puns. And, although my husband is working from home, sitting not one metre to my left sharing MY STANDING DESK because LOCKDOWN (this post is pre-recorded), I can’t blame him. He doesn’t even know what I’m doing other than hammering away beside him. He’s working on … stuff, computery stuff, for education. I’m sure he’d throw in some new and improved puns if he got the chance.

The backstory behind these bear-able silly illos