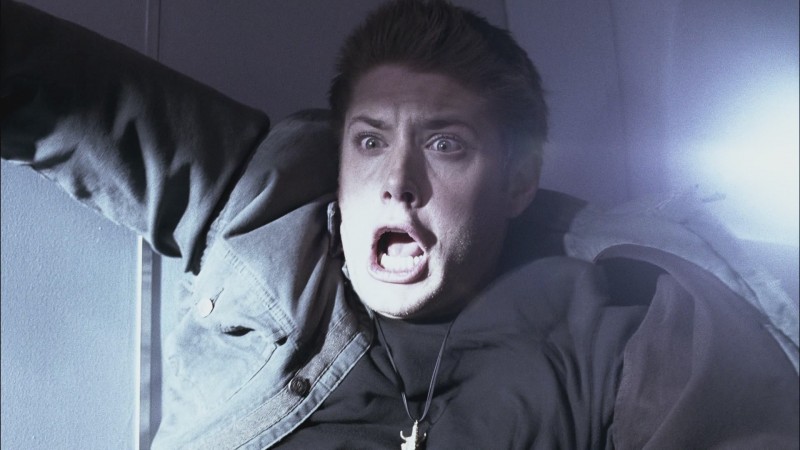 A commentary from the peanut gallery by Nalini Haynes, CJ Dee and Rebecca Fleming

‘Phantom Traveller’ is the last review before I started taking notes while the peanut gallery was in action. These reviews are starting to come together. The peanut gallery ranges from dry observations to funny, especially if you’re sitting on the couch in my spot. Yes, I have a spot.

I like the way the Geek Girlz anticipate wearing my drinks.

“Put your drink down, Nalini,” says CJ, eyeing my drink and leaning away while the music ramps up the tension.

In this zode planes plummet from the sky. Survivors are contagious: like Typhoid Mary, they carry their contagion onto other aircraft, causing fatal crashes. Unlike Typhoid Mary, they aren’t immune: the next crash kills ’em. In fact, subsequent crashes seem intended to kill ’em. This is a horror show, right?

The opening scene has this dude sitting in front of a brightly-lit beach scene. The SFX in this series — especially the green-screen effects — are atrocious, but still. This image was so incongruous that I, li’l vision impaired ol’ me, was staring at the background, trying to decide if the waves were moving… is the guy meant to be sitting on a beach in the story? Nope, it was a humorous gotcha. He gets up and moves away from a travel poster advertising the glories of the beach. Ha, ha. Didn’t catch me. 😛

Dude goes into the mens. As in, the men’s toilet; do I really have to clarify these things? 😀

A cloud of — a swarm of — something emerges from the air vent, swirls through the air before pouring into today’s first victim-of-the-week.

A terrified traveller suddenly becomes Mr Partay-on-the-plane. Until he arises, walks up the aisle, opens the exterior door and flies out the door. Or is sucked out. The plane lurches out of control. Passengers scream.

N: I didn’t think you could open the door mid-flight.

CJ: From memory the demons give their vessels superhuman strength. Maybe only mere mortals can’t open them.

Sam wakes Dean because victims of insomnia like to share the love. Dean is cranky, he doesn’t want to share. Sam confesses that demon-hunting is getting to him. Dean says it doesn’t bother him. Sam pulls an enormous knife, almost a short sword, out from under Dean’s pillow.

Hilarity from the peanut gallery. Thoughts about the alpha brother being a pretentious wanker may have been uttered.

CJ: Never! Don’t listen to them, Dean. I would NEVER bad mouth the Alpha Brother.

Jerry, aka Sam from Dark Angel (Brian Markinson, recognised only by moi because the other two need an eddycashun in the geekiness), calls in Sam and Dean with a plea for help.

Sam and Dean play MIB with stolen Homeland Security IDs. After stealing a piece of the plane they discover sulphur on the door handle. Because demons possessing humans exude sulphur through their human pores. Natch.

The pilot who survived the previous crash is going up in a small plane already. No time for R&R (rest and recuperation) or even SiS (screaming in solitude) for this guy. He goes up with an instructor.

And comes down again. The short way.

CJ shifts in her seat and flicks her hand as if deterring a fly.

One of the survivors, those people destined to die horribly and very soon after surviving one crash already, is planning to go up again. She’s a steward. Seriously, this woman isn’t having counselling or even a brief respite. She’s getting back on that bike and riding it. With her cavalier attitude I half-suspected she was already possessed… except in this zode we’re being led by the hand and shown all the things.

Dean tries calling the steward to get her to miss her flight. She calls his bluff and gets on the plane — this chick knows how to deal with trolls. Pity she’s not quite so ofay with demons.

Sam volunteers to take the plane-ride-to-hell. Dean, terrified, can’t let his Beta Brother save the day so he accompanies him on the plane.

Dean is terrified. He’s pissing himself with fear. It’s hilarious.

Sam thinks it’s hilarious until he takes a stand because the possessing demon hasn’t shown up yet and it likes the terrified travellers; apparently they’re yummy noms for the demon.

We’re leaning forward in our seats, waiting for Dean to be possessed.

The name of Christ is spoken in Latin allowing suspect number one, the steward, to be ruled out. Dean begs her help to get the co-pilot. Of course the victim of a recent plane crash helps Dean get access to the co-pilot because Dean is just so lovable and trustworthy.

Followed by sexual tension. Then Sam and Dean drive off in their Impala (beasty car with the throaty muffler). I’m still waiting for them to drive off into a literal sunset. Bet it happens… but how long will it take?

The special effects were so seamless we laughed at the planes in the sky — they didn’t even bother to put a model against a blue sky and take photos. It was all really bad CGI (computer graphics interface) with background lighting clashing with foreground lighting.

And the blue screens. We can tell what color they use. It seems the Supernatural team like a blue screen for their green-screen FX (effects).

Watching Supernatural with friends forming the peanut gallery is the best. We laugh. We heckle. We enjoy the eye-candy, the humor, the bromance between brothers… Supernatural is the best. Even when its plot and storytelling is definitely sub-par.

3 out of 5 stars. Possibly less.
Enjoyment factor with friends:

FYI Rebecca was there and contributed to the peanut gallery but it’s been so long since we watched this zode now that we’ve all forgotten her acerbic comments. Next time!

There’s a Supernatural wiki for those who want more.