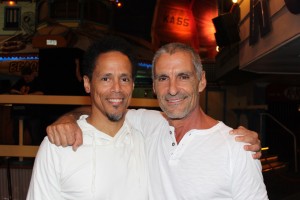 I interviewed a series of people today in the leadup to Armageddon Expo Melbourne 2014. The scariest interview was a confrontation with not one but two Goa’ould from Stargate. Actors Peter Williams (Apophis) and Cliff Simon (Ba’al) talk all too briefly about their careers.

A unique take on a Bachelor of Arts in geology and archaeology: Peter Williams seemed to think qualifying as an archaeologist prepared him for playing an archaeological character in Stargate! Peter played Moe in McGyver, Apophis in Stargate, a convict in Riddick, Hal in Dark Angel, Jackson in the Xfiles… he has a loooong list of credits to his name.

Cliff Simon is your typical over-achiever. He’s been a gymnast and he qualified for the 1984 olympics in swimming. In the South African air force he  achieved the highest athletic award, the Victor Ludorum. After teaching windsurfing and water-skiiing, Cliff worked on stage as a dancer/acrobat, including performing at the Moulin Rouge in Paris before becoming a model then a classic bad guy in Hollywood Television.

This is a very shot but high-energy interview, available in video (MP4) format below. Later it will also be available in podcast (audio-only) format. I hope you enjoy.

If you enjoyed this, check out this video of Stargate team member Chris Judge.