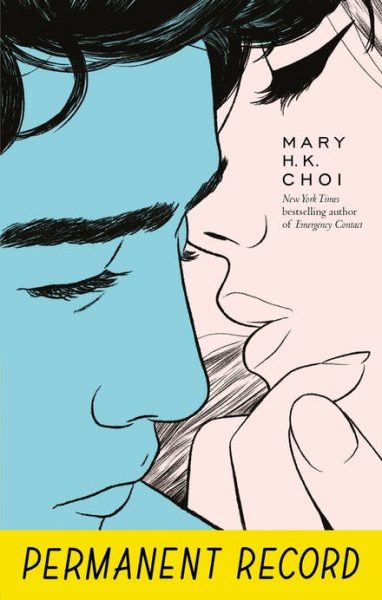 Pablo is working in a ‘bodega’ (a new word for me). It’s a sort of corner store I think. One day a celebrity, Lenna Smart, walks in. He’s smitten. She comes back. Cue Cinderella story but curiously lacking any kind of permanent record. All the commitment and sacrifice goes one way.

With Lenna yanking his chain, Pablo disappears from his world without explanation and without the ability to explain to others what is going on. I decided Permanent Record was the new Houseguest by Hugh Mackay but for the next generation. I was wrong.

Pablo is so depressed that the people who care for him stage an intervention. Again and again. Still, his life goes off the rails. Permanent Record is about his struggle, his way through the myriad issues confronting him.

TBH I’m not overly fond of the Cinderella story. I remember reading Cinderella when I was maybe 6 and feeling depressed because I believed no one would ever rescue me. I wanted a story that showed the protagonist rescuing herself. As such, I’m more a fan of Marie Lu’s version of Cinderella. But I do absolutely love My fairy godmother is a drag queen, because it’s more complicated and more liberating than the original.

Why am I saying this? Because when I thought Permanent Record was just a Cinderella story I nearly stopped reading. I kept going, mostly because I love Choi’s Emergency Contact, and my perseverance paid off.

Is there a racial equivalent of the Bechdel Test? If so, what’s it called? Permanent Record totally passes any racial equivalent because every other person (if not more) is a person of colour. At first it seemed to stack up disproportionately to reality but then surely minorities have their connections, just like the disability community can be surprisingly cohesive and interconnected at times.

Plus I lived on a street in Melbourne where the proportion of whites to coloureds may have been close to even (whites were still outnumbered I think) but the proportion of Australian-born to immigrants? Totally weighed towards immigrants. That street was the poster neighbourhood for overcoming racism. (But not for class-based prejudice.)

Possibly the element that, to me, most compensated for the Cinderella component of the story was the representation of celebrity. Lenna Smart is complicated. She subjects herself to a horrendous ‘beauty’ regime to comply with social expectations. Her public persona and appearance is a shell but it’s a shell that she’s chosen. The ‘poor little rich girl’ trope plays into Permanent Record but Choi calls it, and Pablo calls Lenna on it. Standing ovation.

I’m not entirely sure if Pablo is mentally ill although he has a slump that can easily be described as depression. Just for the record: academia and others segregate mental health issues from disability. Even if you classify mental health problems as a disability, there are degrees. Just like needing glasses does not qualify you to claim you have a disability, having a bout of depression — particularly relatively short-lived reactive depression — does not classify as a disability. Likewise, if wearing glasses fixes your eyesight, you’re not disabled. And if taking pills fixes your depression, you’re not disabled. A disability cannot be so easily overcome. ‘Disability’ implies BARRIERS to participation in society. Plus there are actual legit online docs (like from the World Health Organisation and the CDC) that define disability.

So. Back to Pablo.

Pablo has a period of reactive depression in response to huge life changes. He feels overwhelmed. Pablo needs to talk to people: to a counsellor, to his parents, and he needs to deal with his finances instead of pretending to be an ostrich. (Apparently it’s a fallacy that ostriches bury their heads in the sand to escape predators but it’s a powerful metaphor.)

Permanent Record ticks all the boxes for me as it explores beyond Pablo’s romance into all areas of his life including his anti-parental attitude (and the injustice of it), his treatment of others, his angsting…

Read Permanent Record if you enjoyed Frankly In Love and The Bride Test.

Thanks to Hachette for the review copy. It looks like Simon & Schuster published this novel in the USA.