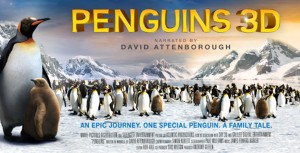 I survived Friday the 13th to wander in to IMAX Melbourne the following Wednesday for a special screening of Penguins 3D.

Before taking the very long escalator down I noticed a little old lady who appeared to be having difficulty getting on the escalator; being concerned about safety, when she was settled on the escalator, I stepped down near her level to touch her lightly on the upper arm and tell her quietly that there is an elevator available so she doesn’t need to use the escalator. IMAX Melbourne is mobility accessible.

Once in the foyer I noticed an interesting assortment of people; a few families and many middle-aged to elderly people assembled for this viewing. In the amphitheater I heard comments like “I’ve never seen a 3D movie before” and “I’ve never been to IMAX before”, so the audience was in for a treat.

In the opening scenes a young king penguin who’s been at sea for 3 years returns to the isle of his birth to find a mate. He calls until a female answers him then we follow their courtship ceremony; during the credits some sweet ladies spoke of this movie as being ‘a love story’.

We skip the actual mating – this is a documentary aimed at family – and see the egg, already ‘laid’, being accepted by the male penguin while the female goes fishing.

Penguins is narrative non-fiction with creative license. I wondered, from time to time, if the penguins in the main storyline are really ‘our’ penguins but that’s really NOT the point. The point of this story is that we follow the life cycle of king penguins in the form of what we believe is one particular family.

Narrative tension builds when ‘our’ penguin chick – looking like a GORGEOUS penguin teddy bear – is threatened by the evil (?) kestrel whose appearance is ugly and whose sound effects are boosted.

Speaking of sounds being amplified: some male penguins get stuck at the wrong end of a beach with elephant seals between them and Penguin City. As the penguins dodge and weave – a bit like a computer game – to try to reconnect with their tribe, the sounds the elephant seals make! The FARTS!!! The genteel-looking ladies in the audience LAUGHED so I imagine primary school children will have HYSTERICS.

Also, this penguin documentary focused more on a narrative, building tension while teaching, carrying us through the story while the other, although beautiful, was a more traditional documentary.

Although we saw one dead penguin and one egg being devoured by a predator, the sensibilities of this documentary are focused more on teaching and nurturing the audience rather than exposing the sensitive to the harsh realities of life. The story is carefully edited to encourage the sensitive to continue watching.

Highly recommended for general viewing, Penguins 3D is rated as PG (according to IMDB) and yet I’d suggest it’s suitable for children of school age and everyone older. The 3D is fairly ordinary  but the general imagery is beautiful with special commendation for the closing shots that remind me of Wine Glass Bay but with snowy surrounds.

These short yet punchy documentaries have the potential to interest everyone from a fairly young child to the most elderly, including the diverse audience with which I saw the movie. Comments from the seats around me were all positive as the credits rolled.

Thanks to IMAX Melbourne for review tix.