The 2020 CripLit Keys presentation video and podcast is here and on all good podcasting platforms. This post is about the Paul Darke Award itself.

Disability Studies is a relatively new field, really only 30 years old and omitted altogether by many universities. In the 1990s, researchers and activists began discussing the prevalence of stories with disabled people where the disabled character ended by either being killed, moving away geographically or being assimilated due to their own personal efforts and not due to society providing disability access. In Tom Shakespeare’s 1999 book, Paul Darke named this the “normality drama” genre.

It is my pleasure to award Dawnhounds by Sascha Stronach the Paul Darke Award for writing numerous disabled characters but especially a character who acquires a disability during the book, who resists being sidelined and written out of the story, and who continues as a character with agency. Congratulations Sascha! 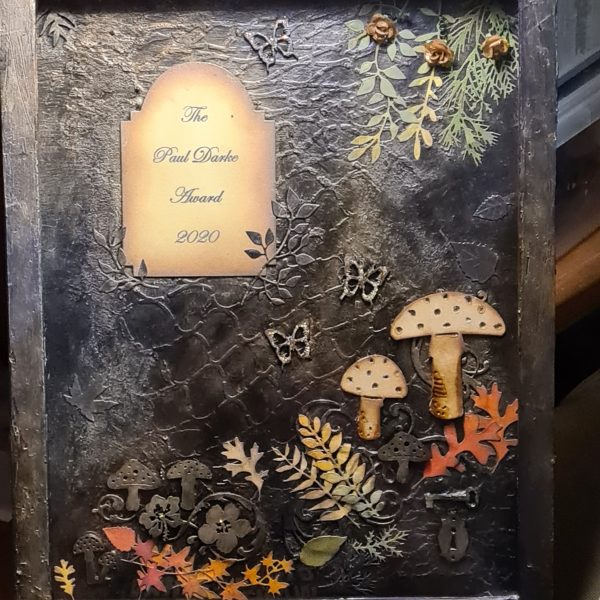 My choice of winner

Throughout 2019 I read numerous books featuring disability, and many of them were good representations. (2019 rocked!) However, I didn’t hear about Dawnhounds until 2020 although it was published in 2019. (Thanks Octavia Cade!) I enjoyed Dawnhounds for, no doubt, the same reasons  it won the Sir Julius Vogel Award: creative worldbuilding and, embedded within a great story, its discussion of social issues. And the gothic houses-eating-people didn’t hurt.

However, none of those elements alone qualify for consideration for the CripLit Keys. I love how Stronach includes disability: many characters on the streets are disabled. But it’s the character who acquires a disability, who limps along – literally – while resisting others’ efforts to write him out of the story that won my heart.

About the Paul Darke Award itself

The text printed onto thick watercolor paper, die cut. And then I glued three layers of that paper together to give the award itself more “weight”. I inked the award to age it using Distress Inks antique linen and vintage photo.

How do I reference the novel? For the Donna Haraway Award, it was fairly simple although I confess to some regrets for not having made the space setting a large feature of that award. That’s something I thought of once the award was at least half-finished. But for the Paul Darke Award? I had no clue.

Well, I have a stencil that looks like a fishing net, and one of the central characters keeps washing up at a wharf, so I figured that was apropos. Texture paste applied through the stencil on the backing board creates a diagonal path down the piece.

I have some dies that cut scrollwork so I cut several sets (at least 5 of each piece) and glued them together for dimension. Along with the key and lock, I glued the scrollwork down.

Donna Haraway’s focus was a robot/cyborg so I thought FUNGAL HOUSES EQUALS MUSHROOM FOCUS. Off I went to Kaisercraft to buy big toadstool dies. I cut several – at least 5 each – layers of watercolor toadstools and glued them together. I inked the toadstools like the award placard, unlike the butterflies, toadstools and flowers that I purchased as precut craftwood, which I painted black. Again.

To get some variation in the plant life – because plants are a BIG part of the scenery, even in the city in Dawnhounds – I inked Neena Solar White and die-cut leaves. Except for the ones I cut from black cardstock.

Edward spent hours playing with the layout then gluing everything down (in consultation).

I also inked the edges of some paper roses and added Stickles glitterglue to the edges of the petals for Edward to glue down.

And I filled in the holes of the big toadstools with Glossy Accents.

After the Great Gluing Event, I applied the metallic beeswax to the frame and backing board. And promptly decided to avoid doing that after gluing dainty multicolored die-cuts if at all possible in the future.

Assembly is easy – if you don’t end up with bits of tissue or kitchen paper that you’ve used to buff the beeswax on the INSIDE of the framed award. Needless to say, I ended up pulling this apart a few times in an effort to remove ALL the white fluffy bits. And went hunting for my soft cloths (cut up holey singlets that I retrieved from hubby’s drawers BECAUSE HOLES). But I didn’t find the damn things until after I finished the very last award. Bloody typical! Five seconds after I no longer urgently needed them and THERE THEY WERE. Right where I’d looked SEVERAL TIMES ALREADY.

You are a legend

If you read this far, you’re a freaking legend. Even if you just skipped to the bottom of the post, give yourself a GOLD STAR. Have a fabulous New Year and stay safe!