It’s Patriots Day, April 15 2013, and the Boston Marathon is about to start. Mark Wahlberg plays Tommy Saunders, a homicide cop who’s been in trouble at work so his ‘reward’ is to be on the finishing line like an overpaid meter maid according to his fellow officers who give him a hard time. Jessica Kensky (Rachel Brosnahan) and Patrick Downes (Christopher O’Shea) have sexytimes then have ‘drunch’ (drinks for lunch) before heading to the finish line.

Meanwhile Dzhokhar Tsarnaev (Alex Wolff) and Tamerlan Tsarnaev (Themo Melikidze) get ready to bomb the marathon. Dzhokhar argues, worrying that their friends might be hurt. Tamerlan is hell-bent on wreaking havoc because he’s a stone cold psychopath. Dzhokhar submits instead of, y’know, being a decent human being and sounding the alarm. Katherine Russell (Melissa Benoist) plays the ‘good’ Muslim mommy, staying at home and minding the extra bombs while the two go out. (Snark. Apparently they haven’t been able to prove her connection to the bombing but nor have they ruled her innocent.)

What follows is 2 hours and 13 minutes of edge-of-your-seat drama. Like Apollo 13, Patriots Day creates tension while engaging us with the human drama, fearing for the real people. Who lives? Who dies? I couldn’t remember the details so this was a gut-wrenching ride, more engaging than a fictional thriller.

However, like fictional thrillers, Patriots Day has splodeys (not all murderous ones) and some scenes that remind me of, say, Die Hard or some early Clint Eastwood movies where poor innocent cars get the shit shot out of them. Although not done for laughs, I couldn’t help laughing at one scene — in the climax — because it was so much like a comedic moment in a fiction action movie.

At the end, we see the survivors and the real participants of this story, some wearing blades, some in chairs, and one blade runner actually doing the marathon. We hear from them; the most moving quote of the movie talks about not seeing victims in any modern-day terrorist attack but seeing ambassadors for peace. I felt quite strongly that Patriots Day does not offer platitudes nor crip inspiration porn but that Patriots Day applauds the resilience of human spirit, self-sacrifice and the strength to overcome disaster. Some of these people may have become blade runners or wheelies but, dayum, they’re not crips, they’re not to be pitied, they are fucking human beings who had a setback and overcame.

In contrast, the lead bomber is a pathetic excuse for a human being and his brother is a wimp who needs to grow a vagina. Because Betty White says so.

We finished watching this movie about half an hour before I typed this. Both the minion and I consider this to be one of the best movies we’ve seen in a while. We’re both blown away. Patriots Day has all the drama and action of a fiction movie with added punch because it is a recreation.

I just noticed it’s rated R. That’s for the depiction of blood, mangled bodies, and terrorism. I was a bit surprised it’s rated so high (I would have thought MA) but it’s probably partly because it’s a true story. 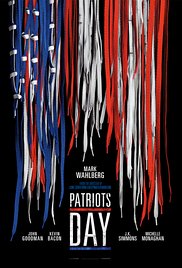