This novel acquires its name from a short myth told within about a woman’s path being a path of thorns. Asher Todd, a woman in disguise with many secrets, arrives at an estate ostensibly to care for the children. However, we soon learn she was sent there to investigate a missing person’s case and was followed by a ghost.

Path of Thorns reveals quite a cast of characters for one novel, offshoots of an interesting world. The setting and characters evokes, for me, the Cadfael series by Edith Pargeter under the pseudonym Ellis Peters.

Cafael stories weren’t fabulous fiction but, in a time when the church frowned upon my reading preferences, they were relatively safe. Also Cadfael’s friends like Sir Hugh, his monastery’s characters and politics, and the romance in every installment of this murder mystery series had me hooked. I found as many as I could in the library and read them, as much as possible, in order. Order was preferable as Sir Hugh was single, met and married his wife, then had kids who grew up. They may only have been cameos but they enriched every installment.

Slatter appears to be reaching for this kind of series, melding crime with community. However, the changing cast and radical location changes don’t embed the reader, at least not this reader. Perhaps I haven’t read enough of Slatter’s stories to get the threads she’s weaving together, I don’t know.

I thought this might have been a Earthly myth but google preferences more recent media by that name. ‘Path of Thorns’ is a song Sarah McLachlan released in 1991. A Japanese manga series, Mushishi, had an anime television episode with that name in 2014. And the Reverso Dictionary says of a thorny path: “If you describe a problem as thorny, you mean that it is very complicated and difficult to solve, and that people are often unwilling to discuss it”. All this combines to make this story an enigma.

Path of Thorns is an enigma because the world purports to be egalitarian. There are women blacksmiths and lawyers and women inherit estates. Same sex marriage is accepted practice and not so much as commented upon. However, this superficially idyll world ensnares women. Women are also disposable, with heirs turned away because pregnant without any other justification.

The church and medical school are places of rampant misogyny, seeking out women to murder them for witchy powers. Or, like in our Middle Ages and Renaissance periods, accusing women of witchcraft just because they’re inconvenient, perhaps too outspoken. How does this fit within this world?

That’s a genuine question. I haven’t read enough of Slatter’s stories set within this world to resolve these apparent contradictions. In fact, this question perplexed me so much that I delayed writing this review for a week or two then ended up in hospital. So now I’m writing this belated review and airing my unresolved puzzle for your contemplation and discussion.

To me, this puzzle is the best recommendation for Path of Thorns: feminist book club members could thoroughly enjoy getting their teeth into a controversial discussion like this!

For one who’s read enough whodunnits, I doubt the plot will be new. Although I ultimately didn’t “buy” the perpetrator, Slatter clearly identified the culprit with her foreshadowing. One of the reasons I delayed this review was wondering if I was being fair. However, the Sisters In Crime event I attended recently confirmed my opinion: Vikki Petraitis is an excellent resource for anyone contemplating writing crime. Although Petraitis writes true crime, she evokes personalities and delves into the depravity of serial killers. In contrast, Slatter’s murderer’s motivations were banal, justifying theft but not murder.

There are the mysteries around Asher Todd as well. I suspect Todd appeared in previous installment/s so Slatter’s revelations weren’t too much of a surprise. However, I am the first to admit I don’t necessarily read or watch for the mystery. I’ve read or watched stories for the enjoyment of the journey. So it depends if you enjoy Slatter’s journey, her worldbuilding, her characters, etcetera.

I admit to not completely nailing Asher Todd and her agenda before the reveal but the Path of Thorns reminded me of watching Sixth Sense and Gattica for the first time. Both times I realized the twist at the end very early then I spent the movie looking for confirmation of my theories. I enjoyed those journeys.

Path of Thorns is a whodunnit with added mystery and magic in a world that, for me, evokes Ellis Peters’s Cadfael series alongside familiar tropes and plot. Although Slatter has built what is billed as a feminist rendition of a world, it’s complex. Book club members may enjoy an in-depth discussion about society’s attitudes and treatment of women. 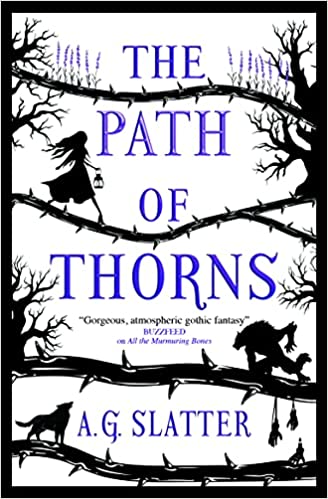