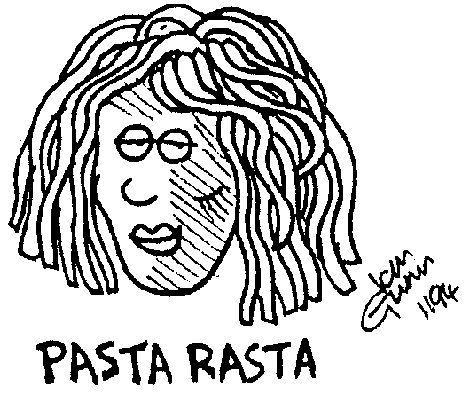 I have no idea what is going on here or why this person is called a ‘pasta rasta’ but I guess the hair looks a bit like pasta? Maybe?

I’m pretty sure Ian Gunn pre-dates the Pastafarians. I wish he’d learned of them! Can you imagine the fun he would have had?

Pastafarianism (a portmanteau of pasta and Rastafarianism) is a social movement that promotes a light-hearted view of religion and opposes the teaching of intelligent design and creationism in public schools. According to adherents, Pastafarianism is a “real, legitimate religion, as much as any other”.

And, of course, the Pastafarians worship the Flying Spaghetti Monster.