In 1983 Harry, (11) and Miles (14, I think) are fisherman’s sons living ‘down the channel’, south of Hobart, Tasmania. Poverty is familiar, as is not having enough to eat while their father spends money on booze. Miles has to go out on the fishing boat with his father during holidays and weekends although he’d rather surf.

Harry follows a friendly dog one day and meets its owner, George. George is a middle-aged man who has a physical deformity — a cleft palate and some kind of abnormality on his face. He may also be learning disabled. Harry is terrified of George as are all the local kids but Jake, the dog, is friendly. Harry is lonely. George offers him food.

George is a nice guy who looks after Harry through their friendship. George’s home becomes a safe haven for Harry during the tumultuous events that follow.

Family conflict and secrets are destroying Harry and Miles’s family.

The boys’ memories of the car accident that killed their mother several years ago gradually return, meshing with events in the present as a storm — literal and metaphoric — looms on the horizon.

Parrett’s descriptions of Tasmanian poverty and the fishing community in the early 1980s have depth that only genuine contact, a genuine relationship, with that culture could reveal.

For some years my family lived near a fishing village in Tasmania, had numerous friends in the fishing industry and, after my step-father left my mother, he became an abalone diver. My grandparents living in Hobart had friends down the channel, some of whom were also in the fishing industry. My close association with this lifestyle and my experience of poverty around that time help me relate to Harry and Miles. Parrett’s story has authenticity.

David Wenham’s reading of Past the Shallows is perfect: he’s Diver Dan from Seachange but with less hesitation, more authority, in this role.

I listened to Past the Shallows whenever I went to the gym; one day I remembered my headphones but forgot my mobile so I couldn’t listen. I was really disappointed; I needed my fix!

Although Past the Shallows has a tragic ending with a little hope seeded in the dénouement — tragedy is not my usual fare — I will listen to this story again because I related to it and enjoyed it so much. Soon this story will be regarded as historical fiction because Parrett reveals the way things were. I highly recommend Past the Shallows* as a story and an audiobook with David Wenham reading.

*In the interests of full disclosure, I worked with Favel’s mother in 1989. I met Favel once: she was wearing school uniform! Although I know a little about Favel’s background, our relationship in the present is purely professional. I lost contact with her mom over twenty years ago. This review is not a favor to a friend. 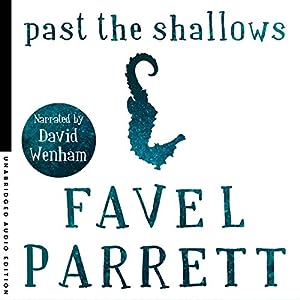