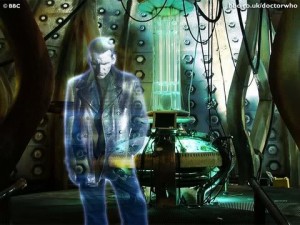 ‘Parting of the Ways’ is part two of the story begun in ‘Bad Wolf‘ and the final episode of season 1 of New Who. This review begins by discussing the end of ‘Bad Wolf’, you have been warned!

At the close of the previous episode Rose was teleported to the daleks’ secret base in the black spaces of Earth’s solar system. In ‘Bad Wolf’ the daleks threatened Rose and the Doctor promised – via visual transmission – to rescue her.

In ‘Parting of the ways’ daleks threaten Rose to extort a ‘prediction’ of the Doctor’s next moves. They target the TARDIS with missiles; apparently it’s materialized, moving in space, open to being hit.

The Doctor rescues Rose: queue a new force-field and the new ability to pick up hitchhikers by materializing around them. My beef with what ensues is that, in many episodes of Classic Who, no weapons work in the TARDIS. Now weapons work in the TARDIS. I feel my childhood is being over-written, my years of watching Doctor Who rendered null and void.

[I climb on to a soap box and prepare to bore audience. A Muppet-style shepherd’s crook extends from the wings, hooks around my neck and jerks me off my soap box.]

After being rescued, Rose joins the team defending Station 5 against the daleks until the Doctor tricks her, sending her back to her own time. Rose is desperate to rejoin the Doctor. She finally realizes that ‘Bad Wolf’, the words following her through time and space, are a message to her, encouraging her to persevere in her attempts to rescue the Doctor.

‘Parting of the Ways’ is another title I wish they hadn’t used because it spoils the story somewhat.

The special feature on design in Doctor Who was fabulous, showing how they created the sets, the Supremely Insane Dalek, the dalek mother ship and more. I highly recommend watching that special feature AFTER you’ve seen the whole season, though, because otherwise SPOILERS.

I’m not sure why the design team went with steampunk Daleks (bronze daleks, a steampunk aesthetic) instead of the more traditional utilitarian design. There’s no sign of the traditional dalek theme music either. Somehow these new daleks just aren’t as scary as the daleks of my childhood; I’m not sure if it’s my age or their prettified image.

‘Parting of the Ways’ is essential viewing to ensure continuity; if you miss this episode, you’ve missed a key part of the overall story arc. Humor is muted in this episode as it’s mostly black when it rears its ugly head. As the climactic episode for the season, the overall feel is a ‘do or die’ in an attempt to save the world. Individual parental judgement is needed on how old your child should be to watch this story. If the story isn’t too scary for your child then ‘Parting of the Ways’ makes good family viewing.