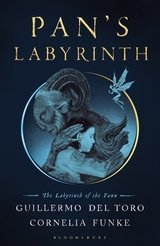 Those of you who came in late may not have heard of Pan’s Labyrinth, the Del Toro movie about a little girl living in Spain during World War II. Her mother marries a commander who is seeking out rebels. He’s nearly as brutal to her and his stepdaughter as he is to his staff and the rebels.

The girl loves fairy tales. She wanders off into the woods to find an entrance to another world. Defying the tropes, she does not wander in — instead Pan sets her tasks she must fulfil to earn her place in the underworld.

The movie is compelling, full of gorgeous and terrifying fantastical imagery. The book adds depth to the movie, giving more detail, threading in more fairy tales to the central story. Intermittent greyscale drawings evoke imagery from the movie, creating a cross-over between that medium and a children’s book.

This is not a children’s story. In my opinion, the story is aimed at mature readers although some high school students will relish this book if they enjoy dark fantasy and literature with depth.

Social issues abound. For example, the rebels help the Allies in World War II, believing that the Allies will help them in return. However,

Spain stayed under the regime of Franco for decades and the allies did betray the rebels because they didn’t consider them useful allies against their new enemy, the Soviet Union (p. 295).

Pan’s Labyrinth vs people with albinism

The only downside of Pan’s Labyrinth for me is the emphasis on ‘paleness’ as symbolism for evil. The ‘Pale Man’ is a seemingly immortal monster who eats children alive. He is the fantasy-world nemesis in this story, alongside the commander who is the ‘real-world’ villain. The authors emphasise the symbolic parallel between the Pale Man and the commander:

Both Ernesto Vidal and the Pale Man were human beings who fed on hearts and souls because they had lost their own (p. 273).

Vilifying super-normative ‘whiteness’ is not a balancing of the scales but an ‘othering’ of extra-normative whiteness, the prevalence of outcasts, the trend of not naming characters with albinism, and the trend of using characters’ appearance — e.g. ‘Whitey’ — as a substitute for a name (Perks, 2003, pp. 75-77). Croley et al’s paper cites Me, Myself and Irene as an example of a villainous character with albinism who also has ‘silly nicknames’, ‘Whitey’ and ‘Casper’ (Croley et al., 2017, p. E4). Likewise, Del Toro and Funke do not give the Pale Man a real name, making him anonymous.

According to Perks (2003, pp. 77-82), benefits to normative ‘whites’, supporting cultural norms and the dominant discourse, are derived not

from exploiting or subjugating actual albinos but, instead… empower[ing] normative whites through their differentiation from “evil” extreme whites, who then become vessels of guilt and sin.

Thus people with albinism are scapegoated for Nazi atrocities in The Da Vinci Code to support American moral superiority on the basis of Nazi crimes of oppression being greater than American oppressions (Howard, 2006; Perks, 2003, pp. 77–82). And in Pan’s Labyrinth, the Pale Man eats children alive.

Because Spanish people seem to be on the darker side for Europeans, some may argue that the Pale Man is a symbol for Britain, America and the rest of Western Europe who consume Spaniards in their fight against fascism then abandon Spain to fascism. However, the authors make no distinction. This coupled with the tendency for albinism to symbolise evil extreme whites thereby exonerates normative whites from responsibility for those atrocities. Likewise Del Toro and Funke’s use of the ‘Pale Man’ feeds into the dominant anti-albinism discourse by shifting responsibility from normative whites onto a vulnerable disabled minority group. (Much of this section of the review is copied from this post with edits, which also includes a bibliography.)

My partner originally purchased the movie during its first release and we’ve watched it several times since. This is that rare creation: a story where the movie and the book belong together, to be consumed as interleaved entities creating a gestalt greater than the sum of their parts. I received an ARC (advance reader’s copy) in paperback format. I need a hardcover: the hardcover version of Pan’s Labyrinth will be a collector’s item.