Seen this on social media lately?  Wondered why? It’s part of a protest in support of visual effects companies who are being sent bust while movies make millions.

Oscar winning company Rhythm & Hues went bust.  When one of the winners tried to say something in his Oscar acceptance speech, he was cut off.  RAE ANN FERA of Fastcocreate reported:

…Rhythm & Hues team came to collect their Oscar for Best Visual Effects… Just as one of the R&H winners (who’s now sadly unemployed) began to talk about the shop, and presumably was about to get a little political, he was unceremoniously cut off by the orchestra to the most distasteful tune of Jaws….

Phillip Broste, lead compositor at Zoic Studios, responded to a comment that Ang Lee made about R&H in an open letter to Ang Lee:

“Mr. Lee, I do believe that you are a thoughtful and brilliant man. And a gifted filmmaker. But I also believe that you and everyone in your tier of our business is fabulously ignorant to the pain and turmoil you are putting artists through. Our employers scramble to chase illegal film subsidies across the globe at the behest of the film studios. Those same subsidies raise overhead, distort the market and cause wage stagnation in what are already trying economic times. Your VFX are already cheaper than they should be. It is disheartening to see how blissfully unaware of this fact you truly are.”

The Big Social Picture report includes tweets from the #VFXProtest hashtag and providing a link to the below image. 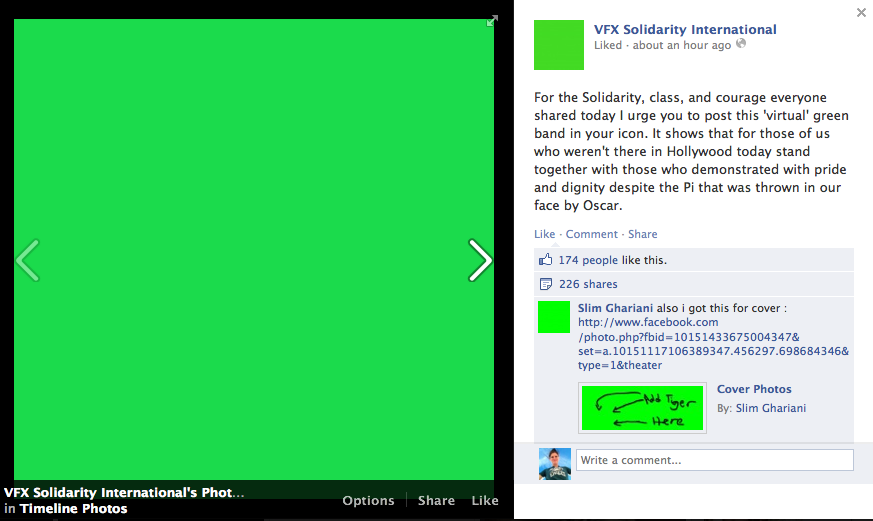