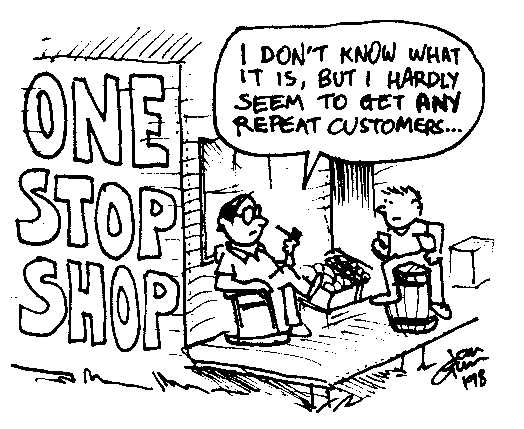 Two people sit on the verandah in front of a building. Words on the side in HUGE letters say ONE STOP SHOP.

A shopkeeper sits in a rocking chair smoking a pipe. The light reflects off his glasses so we can’t see his eyes. He says, “I don’t know what it is, but I hardly seem to get any repeat customers …”

The other person manspreads while sitting on an upright barrel. He has one arm akimbo with his hand resting on his knee. His other arm is wrapped around a rectangular item. From his pose, he appears to be less of a customer than perhaps head office come to interrogate the shop keeper regarding poor sales.

OMG THE PUNS, THE PUNS.