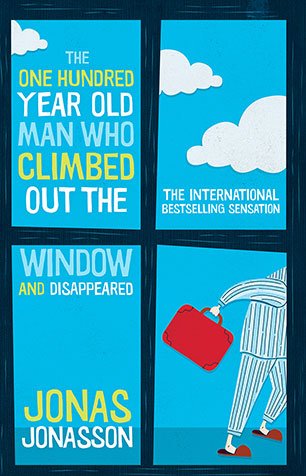 If you haven’t yet read The One Hundred-Year-Old Man who Climbed out the Window and Disappeared, what have you been doing for the last ten years? It’s not a new book, published way back in 2009 (published in English in 2012), but it’s worth a revisit.

The One Hundred-Year-Old Man who Climbed out the Window and Disappeared, written by Swedish author Jonas Jonasson, is a fictional book that everybody needs to read at least once, and will in all likelihood go back to enjoy again and again. Set in Sweden, it follows the adventure of Allan Karlsson, who on his hundredth birthday decides to bail on his nursing home celebrations and climb out the window (if you guessed that part of the plot already, you’re a genius).

What follows is an ongoing series of genuinely funny mishaps and circumstances as Allan keeps moving forward to avoid getting sent back to the nursing home. Along the way he befriends a number of oddball characters, each with their own unlikely histories.

Interspersed throughout his adventure is the story of Allan’s earlier life, each recollection more incredible than the last. Jonas Jonasson uses real historical characters (think Stalin, Nixon, etc) and events and cleverly places Allan right in the middle of them as an unseen key player.

This book is quite unlike any I had read before. Jonas Jonasson has this style of writing that charms you, right from the first page. His characters are quirky and their motivations are laid out clearly throughout the story, meaning even the bad guys end up being lovable.

Primarily, it’s the character of Allan Karlsson who makes the story. He has this almost childlike attitude towards life, just accepting people and situations at face value. Allan is naive and innocent, and yet also highly intelligent. He is happy to try anything or help anyone, unless they are rude or mean, then they deserve whatever they have coming. Accidental murder? Whoops, well he was being rather aggressive for no good reason. Got any more vodka?

This creates a story where, as the reader, you understand the big-picture complexity of some of the situations he is in — nuclear detonation, anyone? — while he seems oblivious to the potential consequences. As a result, he has this almost slapstick adventure where you’re watching through your fingers waiting for his actions to backfire. And yet he walks through the chaos narrowly dodging unseen disaster while admiring the view. There is a fantastic tension in the narrative, and genuine enjoyment as the you wait to see how Allan and his friends could possibly escape each sticky situation.

The One Hundred-Year-Old Man who Climbed out the Window and Disappeared is an incredibly charming and enjoyable adventure. If you just want a book to read for the pure pleasure and enjoyment of it, I can’t recommend this hilarious adventure highly enough. 5 out of 5 stars.

Other books you will enjoy if you liked this one: