Juniper limps towards New Salem, alone after murdering her father. Her sisters fled home seven years earlier, leaving her alone, stewing in her hatred and bitterness. Now she’s heading into the city to find a new place for herself. Little does she expect to become one of the Once and Future Witches.

Bella is an assistant librarian, keeping her head down and avoiding notice. Her abusive father sent her to an abusive “home” seven years ago. Since, she’s had no contact with her sisters.

Agnes works in a mill with other women, trying to evade the grasping hands and roving eye of the manager. She’s pregnant but has no intention of marrying the father. Lucky, that, because as she walks away from him, he reveals his true colors by hurling abuse at her.

Bella reads words from a book, feels a pull… all three arrive in a town square at the solstice where a mysterious tower appears…

Battle of the sexes

The Once and Future Witches seems to epitomise the battle of the sexes, depicting men as predators and abusers, grasping for power while crushing women under their boots.

Although the battle for equality is the reason women turn to witchcraft, and appears to be the very genesis of witchcraft, the story softens its initially gender-driven binary stance. Some men are good, it’s a matter of determining who can be trusted.

Witchcraft isn’t so gender-driven either: girl spells and boy spells aren’t so black and white.

Early on, Once and Future Witches appears to represent genders as binary. Then the crone is a lesbian. Another woman reveals herself as trans. Yet another woman, once reviled, is redeemed because she knowingly helped and supported the trans woman (p. 433).

Harrow incorporates many historical figures by gender-flipping them. Andrew Lang, the Brit who recorded so many fairy tales (find them on the Gutenberg Project for free) is, here, a woman, as are many, many others including the Sisters Grimm.

Women hid witching away in children’s nursery rhymes, in places men overlook as inconsequential women’s places, like in embroidery and sewing boxes. This becomes women’s power.

People of color in the Once and Future Witches represent Native Americans and many other races including African Americans in a New Orleans-type community, in a suburb called New Cairo. These people are different; Harrow does not write Black “coats” but Black characters. She incorporates known ethnic cultures – religion, dance, song – into different types of magic respectfully and equitably.

Notably, Jessica P Wick’s NPR review of the Once And Future Witches calls for more Black representation but does not even mention disability despite one of the central witching having a disability. This oversight is frustrating but typical.

Disability is the one minority that Harrow, like so many feminist writers before, portrays as asexual (p.358), evil, wicked, monstrous, and disposable. Juniper is a murderer not someone who killed once in self-defence. Her disability, caused by a fire permanently damaging her foot and ankle, symbolises character flaws of bitterness and hatred that must be purged by fire.

Although in many ways I loved Juniper’s character and most of her story arc, there is a sadness, a sense that “people like me” are barred from normal lives and acceptance by others. We have to make extraordinary sacrifices, including sacrificing WHO WE ARE, in order to become tolerable. And so it is for Juniper.

To be fair, Harrow briefly allows Agnes to become a monster (p.400) but the mention is so brief, so fleeting, gone in the blink of an eye. Despite the fact that lots of mothers become “monsters” or “monstrously powerful” to protect their children.

Furthermore, Juniper has agency and passionately, desperately, throws herself into suffrage and protecting others. And yet, the way others, including her own sisters, react to her, think of her, discriminate against her, is disappointing in an otherwise excellent feminist novel. Overall, I liked Juniper as a character but felt that she bore too much responsibility, was given and accepted too much blame and bore an unreasonable portion of the cost of their fight. There was no equity and no equality.

The Once and Future Witches takes witchcraft into the inevitable arena of the Battle of the Sexes, in a kick-ass fantasy romp in an alternate world. Harrow’s representation of various genders and race is excellent but her portrayal of disability is ableist, with the disabled character bearing disproportionate responsibility, blame and cost. For such an otherwise exceptional feminist fantasy novel, this skewing was disappointing and disrupted the story for me. As such, I give The Once and Future Witches 4 stars.

Read this if you loved The Ten Thousand Doors of January by the same author. 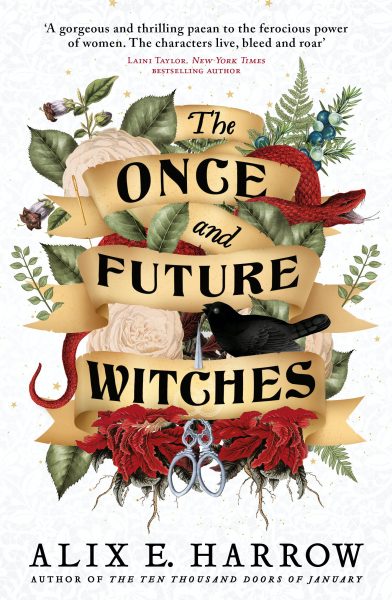