A guest blog by Glenda Millard

It seems to me that there are two basic categories of author: those who plan meticulously and those who do not. I belong to the latter group. When I first began to write books, I thought I must be the only author who began writing without knowing what would happen — what the characters would be like, what problems and issues would arise and how everything would be resolved.

Perhaps this idea might have been a reflection of the way we learnt to write stories at school: there has to be a beginning, a middle and an ending and there must be a point of conflict or some issue to be resolved. That is a fine framework to hang a story on and one which the writer keeps in mind during the process of writing.

However, it has been my experience that when I try in advance to devise plots, calculate timelines, draw maps or imagine fully developed characters, I find that I lose interest when I actually commence writing the story. It is almost as though I have already written the story and it has become all too familiar.

For me, not knowing everything about the story, all the traits of the character, the exact nature of events or the outcome is exciting and stimulating. In many ways it is similar to the way I feel when I am reading a good book: I can’t wait to find out what happens next. Similarly, writing without a clearly defined plan keeps me fully engaged. It keeps my mind alert to what is happening or might happen and I am sometimes surprised at what I discover about the responses and reactions of my characters.

‘Not having a plan seems a bit airy fairy. What do you do? How do you start? You must have had some idea in your mind when you typed the first word of your book – what was it?’

And you’re exactly right…there is no magic, no mystery about writing a novel. First there has to be a point of interest, something that stimulates the desire to write and discover and uncover more. So here’s how it worked when I wrote The Stars at Oktober Bend.

First, I read a short feature article in a Saturday edition of The Age newspaper. (Incidentally, the last YA novel I wrote, A Small Free Kiss in the Dark, also came about because of an article in The Age.) This one was about a teenage girl who could sing. She sang so well that she was awarded a scholarship to study music at a prestigious conservatorium. But what caught my eye and held my interest was that this girl was homeless. I was mightily impressed to learn that here was a girl who slept on other people’s couches and, at times, under bridges, yet still managed to go to school and still wanted to sing.

So I decided I wanted to write about a girl with a traumatic background who had a talent. And the talent would be the thing which saved her from her past. That was the point at which I began to write and as I wrote, I had to think about what Alice’s talent was and what her trauma was.

As it turned out, they were like reflections of one another … Alice’s talent was self expression, the trauma or tragedy was loss of that. Then I had to determine how that loss occurred.

But you see, I didn’t really have to work all that out in the beginning — throughout The Stars at Oktober Bend the reader and I are working out what might have happened to Alice to make her the way she was. In a way, we’re in it together, you and me, waiting for Alice to be able to articulate her trauma.

My initial intention was that Alice’s gift was her voice… then something happened in my personal world that changed all that. My daughter was studying for her Masters in Speech Pathology and I became aware of language disorders, their causes and affects. I began to imagine the anguish of a person whose intellect was unimpaired suddenly having their voice so severely impacted that she might be considered by some to be intellectually challenged. I made a big decision. I took Alice’s voice away. Up until then my story had been written in third person. But it was clear to me that Alice could best represent herself with her challenging syntax, poetry and prose peculiar only to her and I decided to rewrite in first person.

The two points I’ve described above give the basics of how The Star’s at Oktober Bend came to be but, even so, when you open the book the very first words you see were written long after I began and they weren’t even at the beginning of the story. I wrote them only after I had become familiar with Alice and Manny.

In one of your other suggested topics, Nalini, you ask me what obstacles I had to overcome whilst writing The Stars at Oktober Bend.

What I’m going to tell you next is perhaps not an obstacle, but a challenge. Possibly the biggest challenge of all.

In July of 2015 my mother passed away. I had been losing her to dementia for some time. Over the final days of her life I sat by her bedside. Most of the time she didn’t know I was there and, sometimes, when I left I would leave little notes for her, hoping the nurses would read them to her if she woke. I read them all at her funeral.

In about November 2015, when I had finished The Stars at Oktober Bend, some of my pre-publication readers asked for a little more at the end of the book. So I wrote another chapter. It is mostly about Alice’s grandmother, Gram, as Alice calls her. Gram was the name my children called my mother. In the final chapter, Alice leaves little notes for her Gram. Her final gift of words and love. The book is dedicated to my mum. My final gift to her. My biggest challenge.

So you see, writing, like life itself, lives and moves and changes direction and even the most short-term plans sometimes need to be flexible.

Thank you again for your interest, Nalini.

I reviewed The Stars at Oktober Bend and gave it 5 stars. 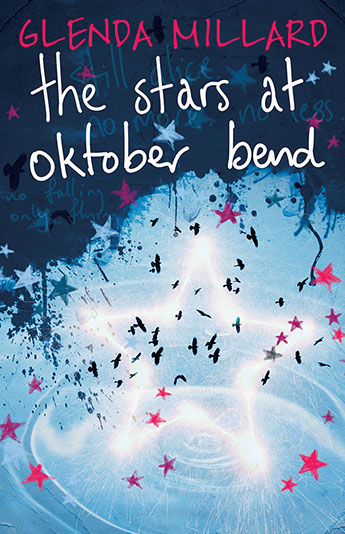