A guest blog by Tony Ballantyne

I wrote Dream Paris on Evernote.

Actually, I wrote Dream Paris using a piece of software called Emacs: you can read more about that here.   I’ve written extensively about the mechanics of writing on my blog, I even run a monthly guest post called “How Writers Write” that details just that, how writers get on with the job of writing.

I’m interested in the way that technology is changing the way that we write.  I wrote my first stories out longhand and then typed them up on a manual typewriter.  When I got my first job I took a loan from the bank to buy  a word processor – the AMSTRAD PCW.

Did it change the way I write?  Yes, it did.  It took a while for me to realise that with a word processor I didn’t have to write in a linear fashion. I could write the scenes or the conversations as they interested me and then cut and paste them into proper place in the story. This may sound odd to people like my daughter, part of a generation who grew up with cut and paste, but it was a revolutionary thought to someone whose first stories were painstakingly copied out from longhand.

Nowadays I write my first drafts very quickly indeed, missing out whole sections of description and detail as I get the shape of the story down, secure in the knowledge that I can go back and fill these in later.

But what about Evernote? In case you don’t know, Evernote is a note-taking app.  Evernote has virtually replaced the old paper notebook I used to carry round with me at all times.  Every writer has a notebook, of course.  It’s great for writing down ideas, of course, but I believe it has an extra use.

There’s something about capturing a scene live.  Remember, writing is about communicating emotion.  Good writers don’t just describe what scenes look like, they capture the emotions inherent in those scenes. That’s why when I’m writing about something I’ve seen in my notebook I’m not writing down what it looks like, I’m trying to capture how it made me feel.

So why move to Evernote?  Well, I’d noticed that I can swipe fast enough now to record what I want to say.  I can edit on the move, on a tram or waiting for a meeting.

When I was writing Dream Paris I spent a few days in our world’s equivalent of that city acting as a flâneur.  Quite a few of the scenes that appeared in the final book were observed, written and edited on Evernote, then slotted into place when I got back home to my computer.

It was an effective way of working, but I can’t help thinking it could be taken further.  I’m currently completing two short stories of around 8000 words each that were written – in pieces – almost entirely on Evernote.  That’s certainly a new way of working for me.  I’ll be very interested to see if my readers notice anything different about them…

Dream London is out now:

Dream Paris is out now too! 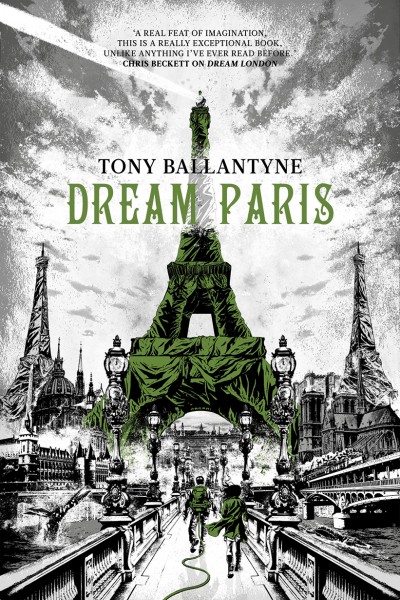