On my way home from watching Godzilla (movie review coming tomorrow) who should I meet but some Transformers on the street and a leather-clad warrior on the train!

Apparently Optimus Prime and Bumblebee busk in their costumes. As Bumblebee was pulling a trolley with speakers, they were probably either heading home or looking for a spot to perform.

The leather-clad warrior said he knows the Transformers so I might use my contact to try to get footage of the action.

Popular in San Francisco, said leather-clad warrior adorns underpants marketed as a chastity belt. I’ve never seen these pants but apparently his pic on the front of the chastity belt shows him in full scary-warrior-face with hair billowing around. Avi Bernshaw is one of Melbourne’s more colourful characters, particularly known for his weapons. Yes, actual weapons – he sells LARP gear. 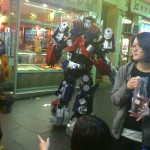 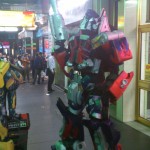 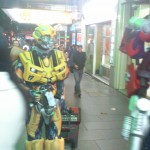 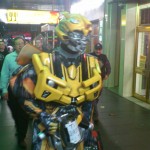 Bumblebee without photobomber in the foreground 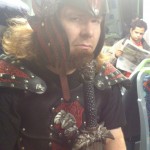 Is it a friend? Is it a foe? It’s a chastity belt ornament! 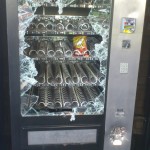 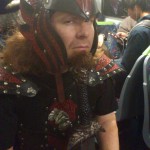