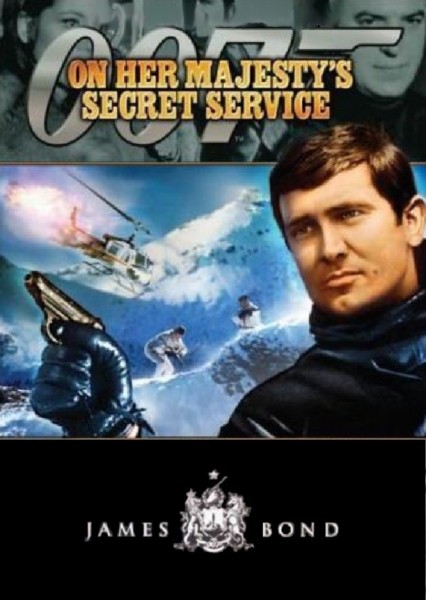 George who? During the filming of You Only Live Twice, Sean Connery announced his retirement from the role of British Secret Service Agent, James Bond 007. As pre-production began on On Her Majesty’s Secret Service, the call was put out. Hundreds, if not thousands, auditioned for the lead role. It wasn’t until an Australian model by the name of George Lazenby walked through the door that the producers found their man.

“This never happen to the other fellow.”

After two years of searching, James Bond manages to track down and confront his arch-nemesis and SPECTRE number One, Ernst Stavro Blofeld. Blofeld plans to unleash biological-warfare on the entire world by introducing sterility spores into the world’s agricultural supplies. Bond meets his match in a beautiful, intelligent but ultimately damaged woman, Tracy di Vicenzo, whom he rescued from an attempted suicide. Through Tracy’s father, Bond gains entry into Blofeld’s mountain stronghold to foil his plans to destroy the world. With ski chases and action aplenty, a James Bond adventure has never been better.

Plot-wise, On Her Majesty’s Secret Service is a very solid entry; being the most faithful novel-conversion Bond movie of the same name helps.

Bond has been after Blofeld for two years now and after coming off You Only Live Twice, my major complaint is why doesn’t Blofeld recognise Bond? They were face-to-face in the previous film, yet here its all forgotten.

[Wasn’t there a Bond movie — the original Casino Royale perhaps — where they established that they have a training school full of 007 aspirants so there’ll always be a Bond but he won’t always have the same face? — Editor’s note]

During production of Thunderball, producers were intending OHMSSto be the next film, however severe weather conditions meant You Only Live Twice was chosen instead.

It is wise to consider this film a standalone film… or maybe just think of it that Bond had plastic surgery. Don’t laugh at me, it was actually something being tossed around during production to account for the new look to Bond. Obviously it never stuck around, but not using it does cause the issue of forgotten identity. Still I refuse to hold this against the film itself. The movie is virtually perfect and Blofeld not recognising Bond is something I can look past.

Bond and Tracy’s relationship in this film is a big subplot. At first you could be forgiven for Tracy just being the first of many Bond girls to come. Yes, there are many others, but she stays around for the entire film as the relationship grows. Blofeld takes Tracy to his stronghold for the final act of the film where she proves just how smart and strong she really is. Tracy’s character is integral to film and proves to be the only girl Bond has ever proposed marriage to.

The act of marriage itself was taken a little hard by critics back in the day. Now it flows perfectly and is looked back on as one of the high points of the franchise. The romantic scenes between the two in no way feel forced. The actors appear to get along on and off screen.

Everyone in On Her Majesty’s Secret Service is there for genuine reasons. The familiar briefing of Q’s gadgets took a hit as the director wanted a more grounded 007 film. It shows with only a single gadget used throughout. Although Q does make a few appearances, he has a very different chemistry with Lazenby than he does with Connery. Here, there is more respect shown and Lazenby even has a more ‘friendly’ feel with Moneypenny. It is much more intermit, with the final scenes really proving to be a beautiful moment between the two.

As already mentioned, George Lazenby took over the lead of James Bond. Hearing how he was cast is quite marvellous. After hearing the role was up for grabs, George went to the same tailor as Sean Connery to get a suit. Then went off to the same barber and had his hair cut the same way as Connery. While there, one of the producers was also there and overheard. Using lots of skill, George managed to get into an interview and eventually got his big chance when screen testing involved him preforming a fight scene. George Lazenby wasn’t skilled in pulling punches for the effect on camera, and punched one of the stuntmen out with one punch. It was this moment on that George was given the role and the rest is history.

Unfortunately, behind the scenes George admits that he was a bit of a brat. He was the star of the film and let that go to his head. He was young and new to fame.

None of this comes across on screen. George has the confidence one should have as Bond. He is ruthless in his fight scenes and carries himself like he owns it. George Lazenby is by far the greatest depiction of James Bond on screen. For all the physical and emotional demands asked of the actor, Lazenby sells it, hands down. If only he had stuck around for a second time, I believe his time as Bond would be looked back on with great fondness.

“Teresa was a saint. I’m known as Tracy.”

Every James Bond needs a leading lady and On Her Majesty’s Secret Service delivers on all fronts here. Hot off the heels of The Avengers (TV series), Diana Rigg was brought onto the cast as a welcomed addition. Producers and director said they needed an actress able to portray all different types of emotions and, since Lazenby hadn’t acted before, they needed someone to help sell the scenes. Diana Rigg is utterly brilliant as Tracy di Vicenzo. From her introduction in the pre-credit scene, Diana sells us on the idea right away that something is a little off with Tracy.

Once reintroduced at the casino table opposite Bond, we find out a little more about the character. Since watching this film years back, I took the time to check out The Avengers and was amazed at just how active Diana was in the show. Her acting skills aren’t the only thing needed here, she performs in many action scenes. During the middle to final parts of the film, Tracy helps out Bond more than any Bond girl before. It is no reason she eventually becomes Mrs Bond, as the romance between the two characters is sold throughout all their scenes together.

Diana Rigg is absolutely beautiful, with a vulnerability; you really see her open up. Not only is she one of the most memorable Bond girls to ever grace the franchise, she isn’t helpless. Tracy holds her own and saves herself from two henchmen. It just goes to show that not all Bond girls are around for the T and A.

This is the Blofeld I’ve been waiting for. From the very first time watching On Her Majesty’s Secret Service, it is this version of Blofeld that has always stuck out. He may be the head of SPECTRE and have henchmen surrounding him, but you get the feeling that one-on-one Blofeld can hold his own. With Telly Savalas, Blofeld has a larger frame and greater imposing figure. Thankfully the producers felt the same way, and its the reason the character was recast.

Whenever Savalas is on screen, there is an unnerving feeling because you’re constantly waiting for the pin to drop, which doesn’t happen until later on. Savalas owns this role with reasons for allowing Bond to live when captured. Savalas has a smooth voice and elegant nature too. A perfect Blofeld but, sadly, this version will forever be overshadowed by the first full appearance of the character in You Only Live Twice. Damn you.

Rounding out the new cast is Italian actor Gabriele Ferzetti as Tracy’s father, Draco. The usual contact type of character. He has a great laugh and big personality on screen. I only recently found out he was dubbed, which these films do so well. The final character worth mentioning is Irma Bunt, as played by German actress Ilse Steppat. She is Blofeld’s henchperson [

— Editor] and mother hen to all the “Angels of Death” in the research stronghold, Piz Gloria. As an older woman, she seems immune to Bond’s charms and just as deadly as anyone the secret agent has ever faced.

It wouldn’t be a James Bond film without all the exotic locations that On Her Majesty’s Secret Service delivers. While location scouting, the director heard of a revolting restaurant —

— in Switzerland sitting atop the mountains. It was partly constructed —

[It hadn’t even opened yet so how would you know it’s revolting?

— and producers decided it was a perfect fit for Piz Gloria. So they funded the rest of the construction even going so far as to add a helipad. The production was given exclusive use during filming and, to this day, Piz Gloria still exists as a restaurant with all the spectacular views seen in the film. It is a stand-out piece and holds many of the action scenes.

Many other scenes look remarkable. The photography on On Her Majesty’s Secret Service is some of the best in the franchise. Ski sequences were helped by an Olympic skier holding the camera while moving backward down the slopes. Aerial shots were accomplished with a rig mount beneath a helicopter. Giving full 360-degree viewing, the aerial shots here are some of the grandest in cinema history, without digital effects of any kind.

John Barry fires on all cylinders delivering the best musical score of his career. The  theme ‘We Have All The Time In The World’ is woven throughout the film whenever Tracy and Bond have their emotional moments. Each Bond theme song has incorporated the title into the song itself but squeezing On Her Majesty’s Secret Service in proved impossible. Instead, John Barry created an instrumental piece used throughout the film. The atmosphere created by the musical score is virtually perfect. I’ve never deleted the soundtrack from my phone since I bought it. Hands down the best to grace the franchise.

Previous editor of the 007 franchise, Peter Hunt, was given the director’s chair this time and he does a fantastic job of bringing 1950s Hollywood class to the James Bond franchise. At various points during action scenes the camera footage is sped up slightly. Fast-paced cuts are used to convey the constant feeling of motion and quickness. Does it have something to do with the time theme or is it just his way of filming and editing? Could be both.

This is hands down the best Bond film up to this point and possibly even the entire series. George Lazenby is my favourite Bond and, with each viewing, my respect for him grows. He may not be the best actor but, playing off such talent as Diana Rigg and Telly Savalas, you would never know it was his first acting role.

Sadly, George doesn’t return for the follow up to this film, and it hurts what comes next. However, we can blame that to agents and an inflated ego. But just imagine the film that could have been Diamonds Are Forever had George Lazenby continued on in the role.

This is a brilliant trip from beginning to emotional end.

James Bond will return in Diamonds Are Forever.