I respond to issues of gender parity here with a focus on efforts to correct the balance.  I think my reviews and interviews of Australian Women Writers speak for themselves in that they indicate support for the AWW challenge in a very practical way. Previously published in Dark Matter issue 9.

The idea of reading more about whether we can manipulate the shape of fandom by discriminating against some fans in order to not discriminate against others, fills me with apathy. “Can’t we just get along?”

I said that the whole business of removing some people from a panel to put other people on a panel, regardless of the actual % of one or the other in fandom generally, is an ambivalent way to go about correcting a problem. 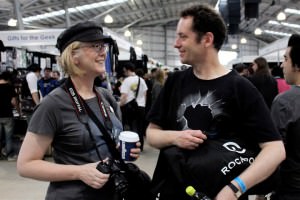 Above are two quotes from the same person. Please note: since reading these posts and writing this article, I have noticed that this person habitually makes smart-ass comments. As I don’t know him personally I can’t comment on his motive or intent: instead I’m responding to the surface message here.

From a position of extraordinary privilege, that of white male-dom, this person describes inclusion of people other than straight white men as discrimination. Furthermore, he claims that to include alternative voices is to ‘manipulate the shape of fandom’. He specifically mentioned removing people from panels as his interpretation of affirmative action efforts. This creates an image of white men queuing for years to sit on panels like people camping out to buy the latest gizmo or game – but for much longer. Apparently including women and minorities requires that these men be evicted. If inclusion is interpreted as removal of others, then he has confirmed there is an in-crowd excluding others.

As long as the dominant culture of the straight white male exists and seeks to quash alternative voices by claiming discrimination if that voice does not continue to be the dominant voice in our culture, we have a problem. Fandom has been manipulated by being controlled by the straight white male demographic, while excluding alternative voices, limiting opportunities for non-privileged minorities such as women, minority racial groups, those with alternative sexual preferences (the LGBT community) and people with disabilities.

Straight white men are, objectively, a minority as they constitute less than half the population. However, straight white men are a priviledged minority whose voice has dominated our culture and continues to do so.
Fandom has been manipulated to its detriment by being controlled by this demographic. Inclusion of other voices is not discrimination against the traditional white male voice; inclusion is the cessation of discrimination against others, creating a more varied, more wholistic community. Inclusion is not manipulation, it is the equivalent of removing torniquets from limbs, allowing the entire body of the SFF community to function in a healthy way instead of seeking to amputate segments of the SFF community in order to allow a dominant, privileged minority to maintain a strangle-hold on discussion.

By encouraging a diverse, thriving SFF community, we increase the potential for SFF as a genre being recognised with respect instead of being treated like a genre ghetto; we increase the likelihood of increased quality and quantity of SFF TV, movies, books…

Inclusion is more than a means of ‘just get[ting] along’; inclusion enables science fiction and fantasy to flourish with a rich culture of diversity. This is why we need incentives like the AWW2012 challenge, why we need alternative voices sitting on panels at conventions and why we need alternative voices reviewing works. Without these efforts to create a cultural shift, the status quo will remain, stifling creativity whilst reinforcing public perceptions that the SFF community, and publishing in general, is a men’s club.