Olive has decided to be child-free by choice. Her three very close friends have not. As Bea, Cecily and Isla all settle down, marry and start their families, Olive feels herself helplessly cast adrift. Everyone thinks Olive will change her mind about children. She is pretty adamant she won’t. Her long-term relationship ends because of it, prompting her to begin questioning her choices. She sets out on a journey of self-discovery with the aim of proving to herself and everyone else around her, that she does not and will not have children.

Olive is an enjoyable, easy read. I devoured it over a couple of days and, although not totally blown away by it, I still found it a pleasure to read and a book I will happily pass on to friends.

Gannon explores a woman’s decision to remain child-free with sensitivity, humor and compassion. She celebrates motherhood in all its wonderful forms. I think every female who picks up this book will find themselves represented. I most certainly did.

Olive’s character is refreshing. Perhaps because choosing to be child-free sadly remains a bit of a taboo, it is rare for us to see protagonists like Olive. Gannon develops Olive’s character beautifully and I had no problem liking her. I think her character will be applauded and loved, particularly by readers who have similar thoughts and feelings about motherhood. Gannon writes about the complexities of the decision to be child free through the exploration of Olive’s worries, frustrations and doubts. Although I always wanted to have children, I still found her character easy to relate to and charming.

Gannon’s book also explores the theme of friendship in a very honest way. Olive and her friends were inseparable in their youth. And they never expected this would change. Gannon reminds us that change is inevitable despite how hard we cling on to the past. We see friends take different paths and the sense of abandonment this causes. Gannon writes empathically about all four women as they make different choices and face varying situations. Gannon shows that whatever decision is made about having children, difficulties and heartbreak can result. What really matters between friends is respect and acceptance.

I was moved by this story and got much more from it than I thought I would. It has made me really appreciate all the different decisions my friends have made and has made me extremely grateful for the incredible diversity of the ladies who make up my tribe.

Olive is a fantastic debut novel and I look forward to what Emma Gannon produces next.

Read this if you enjoy Marian Keyes’s books like The Woman Who Stole My Life and Monica McInerney’s books like Hello from the Gillespies. 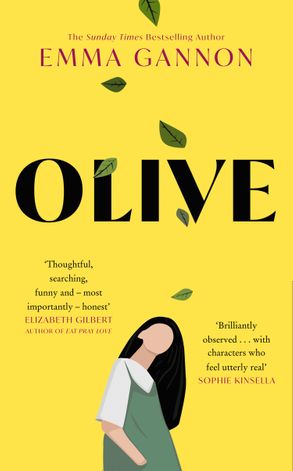