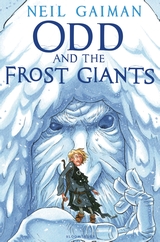 Odd faces Asgard’s ancient enemy, the Frost Giants, in this elegant coming-of-age tale aimed at readers in grades 3 to 6.

The actual book is gorgeous: a predominantly blue dustjacket reveals the Frost Giant’s face while Odd provides contrast. The cover underneath is blue cloth hardcover with silver lettering. The text is large for young readers, interspersed with pen-and-ink drawings. Footprints in the snow trail across the bottom of many pages.

I highly recommend Odd and the Frost Giants as a gateway to Norse mythology, a reader for primary school and a story to read to younger children. The simple elegance of the story will appeal to older readers and Gaiman fans as well.