This is a new special edition of Odd and the Frost Giants. The first was released in 2010. This hardcover edition is illustrated using line drawings, silver gilding and a cutout on the front cover featuring Chris Riddell’s artwork on the cover with monstrous eyes peering between stalactites and stalagmites from the interior of the book. This is a sign of things to come.

Odd faces Asgard’s ancient enemy, the Frost Giants, in this elegant coming-of-age tale aimed at readers in grades 3 to 6. Well, originally aimed at readers in grades 3 to 6. This beautiful new edition, with pictures scattered throughout and decorative elements on nearly every page, will appeal to younger children to be read to and to ‘children of all ages’ who appreciate simplistic elegance in storytelling and artwork melding Medieval monks’ illustrated works with contemporary designs.

Odd is disabled: he walks with a cane and suffers pain from an old injury. Although he interacts with Norse gods, he remains a cripple. Odd is another Hiccup: a great protagonist normalising disability, providing positive representation.

There is nothing that Chris Riddell cannot improve. I love his work. Gaiman and Riddell’s recent collaboration on The Sleeper and the Spindle is stunning, gorgeous and my favourite, most memorable book from the fairytale genre for readers of all ages. Odd and the Frost Giants is a similar collaboration.

I highly recommend Odd and the Frost Giants as a gateway to Norse mythology, a reader for primary school and a story to read to younger children. The simple elegance of the story will appeal to older readers and Gaiman fans as well. There is nothing that Chris Riddell cannot improve. 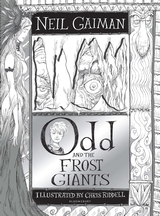