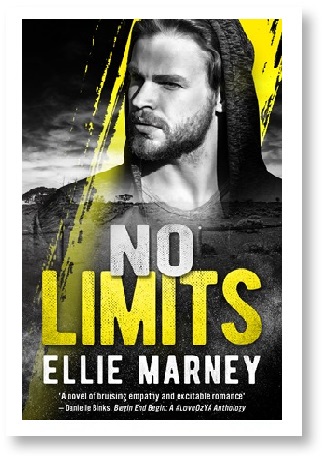 No Limits for Harris Derwent, a bad boy but he’s not so bad that he wants to be a drug mule, not even when a friend offers him a job could get him out of his father’s house. Amie is a nursing assistant in the local hospital. Her Punjabi family ties keep her in this small town although she had dreams of being a photographer. They meet in hospital, Amie caring for Harris after he was shot helping a friend. Sargent Blunt, Amie’s father, encourages Harris to accept a job as a runner for a drug ring so Blunt can take down some local drug dealers before his health forces him to retire.

Amie is half Punjabi with close relationships with her grandmother, aunt and cousins in Mildura, a nearby town (well, as nearby as towns get in Australia). Amie visits then stays with her Punjabi family while Harris delves ever deeper into the drug trade in the same town, hours distant from Amie’s father and help. What I know of Indian culture and Marney’s attention to detail in her narration of a Punjabi-influenced wedding and other cultural customs reflects deep research and cultural consultation. However, only an #ownvoices reviewer could accurately discuss cultural issues with credibility. Amie’s cultural background is incidental to the story — at no point is her ethnic group a plot point — but Amie’s cultural background adds flavor to the story and depth of character. As a minority representative myself, I felt Marney used minority representation respectfully and I’d be happy if she wrote something similar featuring disability.

Harris lives in poverty and has all his life. His father is violent, so much so that his mother fled with Harris’s sister years ago. She left Harris behind because his father threatened to kill him if she took Harris. Marney’s depiction of poverty and violence is as realistic and yet riveting as Yellow by Megan Jacobson, everything by Zana Fraillon, Frankie by Shivaun Plozza and Dragonfly Song by Wendy Orr (the last is for younger readers). Like Marney, these authors write poverty and social issues in a relatable, readable way, which I relish as an alternative to the ‘I’m so poor I’m a scholarship student at an expensive private school’ trope or the aspirational wealth in Modern Family.

No Limits is a meld of Australian young adult fiction, Breaking Bad and Georgette Heyer — if Heyer wrote working class rural cross-cultural romance in the 21st century. I loved it.