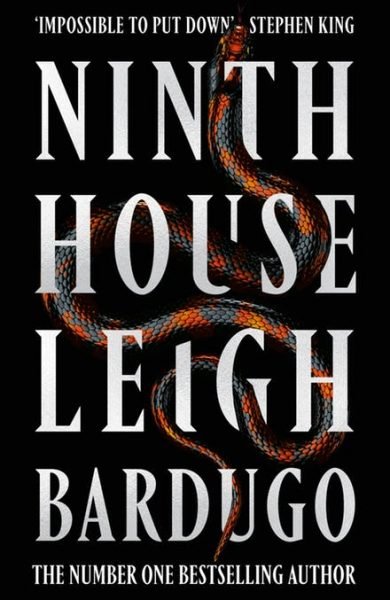 Alex Stern is a survivor. She dropped out of school to run with a bad crowd who ended up dead. When Alex woke up in hospital, Dean Sandow offered her a scholarship to Yale so she could join Lethe’s guardians. Only the Dean’s offer didn’t come with extra tuition to make up for an inadequate academic foundation. Nor did it include any assistance to help Alex balance her academic life and her guardianship role.

Guardians are needed because ‘grays’ (ghosts) try to break into magical circles of protection when, for example, a house ceremony involves cutting open a mentally ill person to rummage around in their guts for prognostication purposes. As you do.

But then a murderer strikes. And Alex realises magic is involved, implicating at least 3 houses.

Early on, <cite>Ninth House</cite> was a little confusing because it seemed to be jumping between at least 3 timelines. However, after a slightly tricky start, Bardugo passes on the furthest-future timeline and settles into unfolding Alex’s history at college with some flashbacks to give the ‘present’ context.

Although Alex’s mentor, Darlington, is a guy, Alex has women roommates, with whom she passes the Bechdel Test. She also builds a relationship with the other occupant of Lethe’s house, Dawes. These women have different interests and personalities. Although they don’t team up Buffy-style, they do come to value one another.

Throughout this novel, Bardugo follows the tradition of speculative fiction novels having a ‘conversation’ or continuing a debate with other works of note. Although there are numerous references to pop culture, Bardugo’s coup de grace is her ‘conversation’ with the Me Too movement and rape culture on campuses. Not only is Bardugo’s treatment of these tropes overt, including date rape and video slut-shaming, but the story also uses allegory. For example, after Alex is attacked by a supernatural creature,

Although usually meek, Dawes goes to the mattresses for Alex after the dean does pretty much say she asked for ‘it’ and blames her not for being a woman but for having an innate supernatural ability. Bardugo challenges the patriarchy and explicitly states that no one ‘asks for it’, the victim is not responsible while the perpetrator is responsible in every way. Not only does Bardugo repeatedly and overtly challenge the ‘she asked for it’ trope but she indulges in turning the tables. Beautifully.

Although this trope may be triggering, with support and care for the reader-survivor this story may help recovery. Consider it a form of bibliotherapy.

Bardugo challenges white colonialism and does so with elegant humour. For example, Darlington thinks

Hopefully she [Alex] hadn’t worn anything too provocative or appropriative. He didn’t want to spend the evening fielding judgemental swipes from Manuscript because Alex had felt the urge to dress as sexy Pocahontas (p. 165).

Almost a throwaway comment and yet so powerful! Bardugo lays a framework for what is acceptable and what isn’t, with hints but not lectures on why.

And this is after hinting at Alex’s ancestry being ‘not white’, to say the least. Also, Detective Turner who helps out the Lethe survivors is an African American.

Alex grew up poor then turned junkie and ran away from home. So then she got up close and familiar with hunger, deprivation etc. Bardugo writes this fairly convincingly, not like most YA authors whose interpretation of ‘poor’ these days seems to be ‘I’m the scholarship kid at a stupidly expensive private school’.

One niggle though: early on, Alex had almost no clothes. Then some of her clothes were dirty and some were destroyed. By this time I’m thinking SHE HAS NO MORE CLOTHES. But instead she’s ‘running out of clothes’. Nope. Continuity sometimes requires literally counting how many items as if you’re playing a computer game.

(I know how frustrating this is: I’m writing a novel and working out my protagonists’ wardrobes and so forth to make them consistent. Also, they’re from average-ish families so they don’t have Buffy-style wardrobes.)

Fly in the ointment

I have a few issues with the finer details of the story but not with the story itself. For example, how ludicrous is it to think that a guardianship society would only ever have two active members on duty? Especially when one of them (at least) has to drink a poisonous potion to see the grays in order to do their work.

Additionally, it seems a student in their last year mentors a first year for one year. Then the society expects the senior to swan off somewhere else, leaving the freshman/sophomore without support other than ‘Occulus’, who is a ‘non-combat’ role.

A whole ‘tomb’ or house or fraternity dedicated to supporting just three students on the best of days. Sounds legit.

It’s a rare book that doesn’t have flaws. Despite these niggles, I’m still entranced with Bardugo’s storytelling.

Ninth House is a fabulous fantasy feast that ensnares the reader. I devoured this novel and highly recommend it. This is the first Bardugo novel I’ve read so now I feel compelled to consume all her others. 5 out of 5 stars.