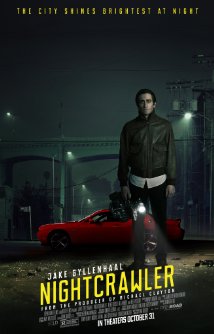 Louis Bloom (Gyllenhaal) is a thief who stumbles into the world of crime journalism in Los Angeles. His business grows with the help of his intern Rick (Ahmed) and television news veteran Nina Romina (Russo).

When he realises just how much money is to be made from sensational news, Lou begins to cross the line between reporting the news and creating it.

When I asked around about what the first thing people thought of when they thought of Jake Gyllenhaal, I received a decent range of things. Gay cowboy. Dweeby bubble boy. Yum. The brother of the chick who replaced Katie Holmes in the Dark Knight trilogy. Of all the things mentioned, ‘intense, twisted nutter’ wasn’t among them. Yet his portrayal of the intense, twisted nutter Louis Bloom was outstanding.

While watching Nightcrawler, I found the character of Louis Bloom unsettling before he had even done anything insidious. It was only when researching the film afterwards that I could pinpoint why. Gyllenhaal employed a technique used in Donnie Darko — no blinking. The effect is remarkable.

The supporting cast were good in that they supported but did not overshadow the main character’s spotlight.

Visually, Nightcrawler is a very gritty film. Initially I thought it might have been set in the 70s or 80s  because it had the particular look that generally indicates these time periods. It was only when technology was being introduced to the plot that I realised it was a more contemporary setting. The effect creates a dark and menacing mood which ties in well with the theme of Nightcrawler.

Nightcrawler is marketed as a thriller, and it is an enjoyable one, but I would also recommend it to anyone who enjoys crime films.

‘What if my problem wasn’t that I don’t understand people but that I don’t like them? What if I was the kind of person who was obliged to hurt you for this? I mean physically.’