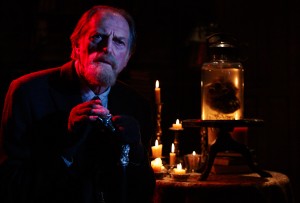 Something in the cargo hold of the plane gets noisy then bangs on the hatch in the stewards’ cabin. Two stewards watch in horror as screws pop out of the hatch.

The plane lands at the airport and taxis, radio silent, to the wrong area to stand, cooling, in silence. Two officials walk to the plane, one feeling the hull, observing that the plane is too cold. Officials are called.

Ephraim Goodweather, or Eph as he likes to be called, discovers that, after having him move out, his wife has installed her new lover in the family home that Eph still owns. Eph’s only hope is for joint custody of their son, Zach. Summoned from the counselling session by two phones blaring did not help Eph’s case.

He rushes to the airport, entering into a pissing contest with other departments about whose jurisdiction owns the plane. Eph wins. Eph and Nora Martinez, a colleague and lover, don hazmat suits and enter the plane.

Weird things are in the plane including biological patterns only visible under ultra violet light. 206 crew and passengers are dead but 4 survivors wake. I thought it was about to turn zombie-freaky but THIS IS DEL TORO. He’s smarter than that.

The remainder of the episode reveals conspiracy, corruption and increasing danger with very high stakes. More horror elements are introduced — no spoilers here, wait until the next episode is reviewed — with a B-grade horror undertone along the lines of Buffy and Angel BUT DARKER, MORE SCARY.

The casting is excellent: any TV and movie buff will recognise familiar faces like Sean Astin (Samwise Gamgee in Lord of the Rings and Mr Smith in Jeremiah), Corey Stoll (Peter Russo in House of Cards), David Bradley (from EVERYTHING including Argus Filch in Harry Potter and William Hartnell in An Adventure in Space and Time).

Del Toro, the genius who brought us Pan’s Labyrinth, Cronos and Hellboy, has now brought us a fabulous new TV show. I’m not a fan of what I think of as ‘real horror’ and I believe The Strain is ‘real horror’ but IT’S DEL TORO. Unless the nightmares get too bad, I’m watching this.