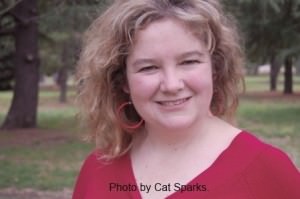 Nicole Murphy has been a primary school teacher, bookstore owner, journalist and checkout chick. She grew up reading fantasy; spent her twenties discovering romance and lives her love of speculative fiction through the Conflux conventions. Her urban fantasy trilogy Dream of Asarlai is published by HarperVoyager. Her publishing venture In fabula-divinos is aimed at mentoring up-and-coming writers. Visit her website.  Nicole responds to issues around the AWW challenge, previously published in Dark Matter issue 9.

I was in my late teens when I discovered the phenomena that was my grandmother’s Mills and Boon collection. It puts nearly every library I’ve ever seen to shame. The bottom shelf of the linen closet was packed with them. Two cupboards in the back room groaned and posed a danger if you didn’t open the doors carefully. More in the other cupboard in the other room. Then there was the drawers and piles of them in her bedroom. And finally, a select hundred or so in the shelves near her chair – the ones she was currently reading. There were thousands of them.

Every month, she’d do a massive swap at the local second hand store. And despite the huge numbers, every one of those books was important. I wanted to do a craft with them for a class I was teaching – it took Grandma a couple of hours to locate thirty books she was willing to let go of.

Finding those books was like a shining beacon in the darkness for me because finally, I was reading books about girls again.

In primary school, it wasn’t that hard to read books about girls. There was Nancy Drew, and Trixie Belden, and Mum gave me her old teenage series about Donna Parker, which seemed very foreign to my eyes.
I was eleven when my younger brother pushed one of Dad’s books into my hands and said ‘You have to read this’. That book was Fellowship of the Ring, and thus was born my life-long love affair with fantasy.
I scoured Dad’s bookshelves (my father had a damn good fantasy and SF collection). I polished off all the Tolkien (including the Silmarillion) and then moved onto Terry Brooks. That was followed by Michael Moorcock. And on it went.

I loved those books. Lord of the Rings is still one of my must-reads and I picked up the Runestaff series a couple of years ago and re-read them for the first time since I was a teenager and they were still as chilling, as weird, as nightmare-inducing, as wonderful as they had been.

Only – I was starting to feel that, while I loved these books, they weren’t exactly for me. I discovered Jean Plaidy in the school library and devoured them, not realising that what I was yearning for was books in which at least one of the main characters looked like me.

You know. A girl.

And then lo, there was the promised land in the form of Grandma’s towers of Mills and Boon. Were some of them crap? Absolutely. But some were glorious and all of them fed my soul and told me that it WAS possible to have books in which girls could not only be an important character but sometimes the ONLY point-of-view character.

Nowadays, with the rise of urban fantasy and paranormal romance, I can read my beloved fantasy and yet see female characters. And I don’t know if it’s that, or if there is a shift, but there’s more women publishing in traditional fantasy that are now giving me a taste of what I was missing during my teen years scouring Dad’s shelves.

Women like Tansy Rayner Roberts and her Creature Court trilogy, where we actually get to see pretty dresses and women doing craft, for goodness sake. Women like N.K. Jemisin and her incredible Inheritance Trilogy, with such amazing women learning to control their lives. Women like Glenda Larke, who are not only giving us incredible women but different women, from different cultures, with different views of the world.

I think we’re kinda spoiled here in Australia – for years now, we’ve had a strong representation of women writing fantasy and science fiction. Sara Douglass, Jennifer Fallon, Trudi Canavan, Karen Miller, Juliet Marillier, Tracey Harding, Marianne de Pierres. Ever since I’ve got into reading mostly Australian work, I’ve not had to worry about where I’m going to find another book that will resonate with me.

And that kinda blinded me to the reality of what’s happening elsewhere. That women’s writing is being lost. That the important things women have to say, things that need to be heard for balance, are being overshadowed by what men have to say.

That I, as a woman writer, need to be aware and need to speak up. Particularly as I don’t just write fantasy and science fiction, but romance as well – the most pushed-down of all the genres.

The Australian Women Writer’s Challenge has awoken that realisation in me and seeing it grow and reach into places that probably seems out of reach when Elizabeth Lheude started things in November such as the Sydney Writer’s Festival has been such an empowering thing.

So now is the time to not rest on laurels, but for women writers (and the men who support and love us) to stand even taller, and speak even stronger. What we have to say is important. Vital.

I hope that we will never again have a situation where a teenage girl is looking at her father’s bookshelves and wondering where the books that speak to her are.