What if Call of Duty Met Ready Player One?

So after The Wasteland Saga everyone kept asking me what I was going to write about next.  More Post-Apocalyptic Dystopia like my book The Old Man and the Wasteland and its two sequels?  Something new?  Maybe a fantasy epic inspired by a year in The Black Forest of Germany?  No.  I wanted to go somewhere that I’d been thinking about for a long time.  And that somewhere was video games.  I’m a gamer and I wanted to tell a story not just set in an imaginary digital world, but in a world where the video gaming was the story.  Soda Pop Soldier is the story of a professional video gamer who fights for a mega corporation in a highly explosive future-war setting.  Call of Duty on crack.  Basically, video gaming is the main character’s job and it’s barely paying the rent.  When things go south for his team he tries to earn some extra cash by buying a character slot in an illegal online tournament simply known as the Black.  Think World of Warcraft meets Dark Vegas.

Like the really awesome novel Ready Player One by Ernest Cline, this is a story told within the world of online gaming.  Instead of a grand puzzle where a poor gamer might make all the money in the world and change his surroundings, I wanted to write some old school Raymond Chandler-style noir fiction.  So I needed to make things hard on PerfectQuestion.  Friends might not be friends.  There’s a MR. Big and he’s intent on getting his way regardless of who has to die.  Along the way I had fun messing up the world, i.e. New York is now on massive arches, Tokyo has become Mega-Tokyo and corporate Greed Heads travel the world in a luxury jet literally covering the markets and ruining economies for gain.  But all that is just backstory.  I really just wanted to write about games and how much fun they are to play.  I got to go nuts and write some epic battles, both modern warfare and fantasy-style.  Yeah, I had a Balrog beating the living crud out of everybody within its long reach.  I got to play with some of my favorite game mechanics like Bullet Time and find out it’s a really useful story telling device for fiction.  In short, I got to make a video game inside my head.  The kind of game I want to play.

So that’s what I tell people when they ask me what my next novel is about.  I tell them it’s Call of Duty meets Ready Player One.  Sometimes I switch it up and add Diablo in there.  It’s fun to watch the looks on people’s faces.  Sometimes they’re confused because they’re not true geeks who would easily understand both references. Sometimes they get one of the two aspects and then I know where they’re coming from.  And sometimes they get both and they know exactly what I’m talking about.  In this moment I have found another of my tribe.  Another Geek in the frozen wastes of our present cultural Dystopia.  What usually follows is an exclamation of interest, like, “That’s awesome!”  I hope it is for them.  It was for me.  Check out Soda Pop Soldier on August 12th and Game On my fellow geeks! 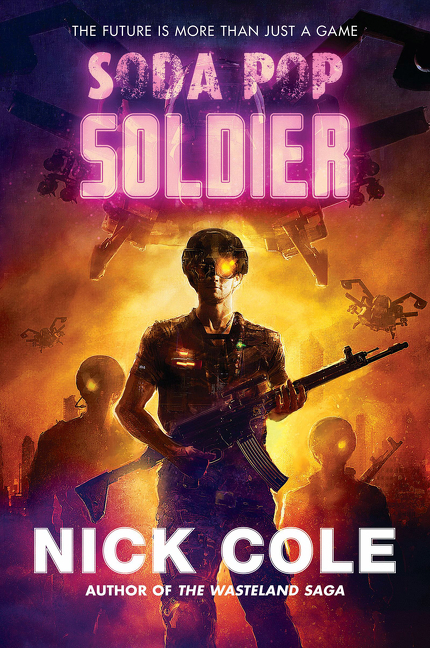