Lady Truthful Newington, aka Newt to her male cousins, celebrates her 18th birthday with a family dinner. Her father, a former admiral, gets carried away with his tales of sea warfare and accidentally summons a storm for with the household is not prepared. A bolt of lightning hits the house, causing chaos in the dining room and giving someone the opportunity to steal the Newington Emerald, an ensorcelled stone of immense worth.

Truthful repairs to London to visit the widowed aunt who will bring her out — and support Truthful’s masquerade as a man while visiting pawn shops in the hopes of recovering the emerald. Inevitably, Truthful runs in to some spy catchers who suspect her French rôle of being a spy for Bonaparte, an evil sorcerer currently imprisoned within the Rock of Gibraltar.

This delightful Regency romance is clearly inspired by Georgette Heyer’s romances, owing much to her influence not just in plot but in style and prose. Garth Nix does an excellent job of presenting a feisty yet genteel young lady attracted to an ineligible young man. I love the references to women masquerading as men in the army, attributable both to history and Sir Terry Pratchett’s Monstrous Regiment methinks.

Nix slips up in matter of form and culture, norms with which Georgette Heyer took pains to comply. The most glaring were Truthful’s “chaperone” whisking herself off to the card room at a ball, leaving Truthful without any chaperone, and her peers not requiring formal introductions to beg leave to dance or even speak. Although these jarred somewhat — I confess to having read many Regency romances — I suspect the more casual contemporary reader won’t bat an eye. Or an eyelid.

Overall, Newt’s Emerald is a charming Regency romance in the style of Georgette Heyer but with magic added. I highly recommend this novel to readers of romance and fantasy adventures. 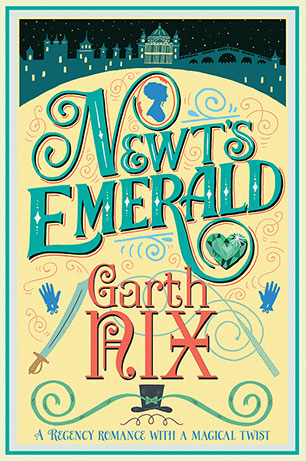