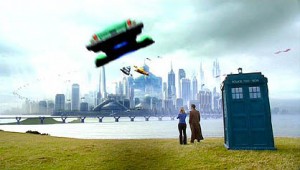 The Doctor (Tennant) and Rose (Piper) land on a planet – New Earth – in the far future and plan a visit to New New York but first they visit a hospital. The Doctor’s psychic paper has a message for him (although why he looked at his own psychic paper is not explained).

A mechanical spider reminiscent of the trouble-makers on Platform 1 during Earth Death (New Who s01e02) spies on Rose and the Doctor. A distant observer ascertains that Rose is pure human.

Reporting to his master – mistress has different connotations – his master demands to see Rose’s face. Lady Cassandra, asploded in s01e02, is back; implausible explanations were offered and a brain is now – loosely – attached to the trampoline.

The Doctor wanders around, finding Ward 26, diagnosing people at a glance, before finding the Face of Bo. He learns of a prophecy that the Face of Bo has something to tell him.

Rose misses the Doctor’s elevator only to find her elevator is hijacked, plunging her into the basement to meet Cassandra, who promptly takes over Rose’s body (queue innuendo, plunging neckline and Rose slapping her own ‘rear bumper’).

Avoid examining the plot for this story. None of the stories in New Who stand up to close scrutiny but this one in particular has fundamental flaws. For example, Lady Cassandra needs an illegal device to body-swap with Rose until she doesn’t; she starts flying from body to body until she suddenly – and inexplicably – decides to stop.

I wonder if Camille Coduri and Zoë Wanamaker double as cat-nurses in this episode? Some of the voices sounded familiar and wouldn’t it be FUN as an actor…

‘New Earth’ is like fanfic of season one of Doctor Who coupled with a response to the fans in that the episode is off-Earth, featuring aliens. (When New Who was first coming out I recall criticisms of it being very Earth-centric.) As a family-friendly zombie story, ‘New Earth’ is eminently suitable.