I loved classic Who so watching Neverwhere for the first time in the early noughties as I did was nostalgic; all the series needed was a blue box and a curly-headed guy offering jelly babies to all and sundry to make the trip down memory lane complete.  Neverwhere is as truly wonderful and horrible as only BBC in the classic Doctor Who era could possibly achieve, although it was made in 1996.  The special effects are appalling.  The sets are largely real, as in REALLY underneath London.  The comedy sometimes reminded me of Douglas Adams, at other times truly awful puns are reminiscent of Piers Anthony: for example, Knightsbridge is Night’s Bridge, Angel/Islington is an angel called Islington.  Good British actors ham it up in a pantomime style just like so many episodes of Doctor Who. The SFX, the puns, the actors, combine to create a unique flavour, making it a delicious cult classic to be treasured especially by classic Who fans and their (our?) ilk.

When I read the novel riding on trains in Melbourne a few years after watching the TV series, I realised that the Neverwhere TV series had many similarities to the original Hitchhiker’s Guide TV series: I preferred the novel.  The problem with the TV series was that it took books I loved and translated them into a visual medium where my imagination provided far better imagery for novels that were not cut and adapted due to constraints, the chains of the visual medium.

The radio play for Hitchiker’s Guide was far, far superior to the television production.  Great actors, good sound effects, dialogue and narration that provided more depth and, in my opinion, more humour, while allowing my imagination to provide the visuals once more.  I don’t believe I ever had the opportunity to listen to the entire series as I only heard a few episodes or portions thereof on the radio and when visiting friends.  I feel a virtual shop calling me, but only if I can find discs: I loathe the purchase of ‘a software license’ where my money can be flushed and my license revoked.  Also, I’m a collector, I WANT THE ARTIFACT.

The Lord of the Rings BBC radio play is also brilliant, arriving in my household as a benefit of marrying wisely.  (Just don’t watch Monkey too soon before listening to the LoTR radio play: the dubbed voice for Pigsy is Gollum.)  Although segments of the LotR books have been cut to fit the 13 hour timeslot, the story is richer with fewer omissions that the LotR movies.  I admit to loving the movies, purchasing the collector’s edition on DVD then convincing my husband that he wanted the new, more extended edition on BluRay.  When he saw it on BR, leaping off the screen AND with new added footage, hubby was very happy with his birthday present.  [shifty eyes]

Although Neverwhere the TV series will always have a special place in my heart, I’m really looking forward to the radio production.  There won’t be issues around Harrod’s refusing to allow filming, for starters! 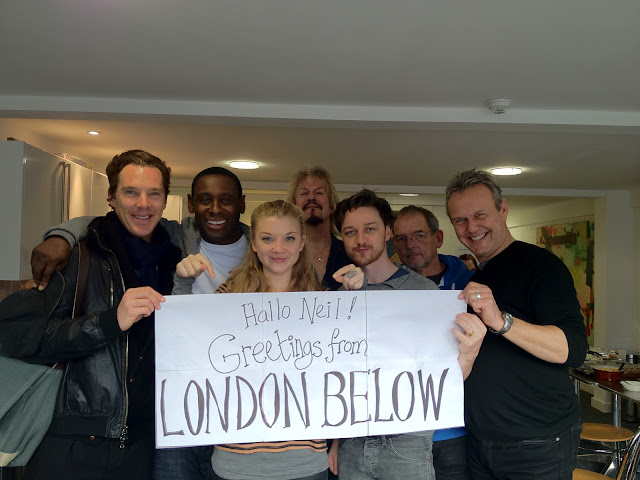 In his blog, Neil lists the cast as: