A mace-wielding teen space-ninja who is kidnapped by a vengeful zealot who forces her to choose between the fate of the Universe, and the ones she loves.

A blend of hard biomedical science fiction with multicultural fantasy, Neodymium Exodus combines the introspection of classics like Perelandra with the vibrant boldness of modern best-sellers like This Alien Shore and Space Opera.

Lem is Neodymium Exodus’s mace-wielding teen. I wouldn’t call her a ninja though. Wikipedia says:

The functions of a ninja included espionage, deception, and surprise attacks.[1] Their covert methods of waging irregular warfare were deemed dishonorable and beneath the honor of the samurai.

Teenage Lem, however, is like an undisciplined bull at a gate when it comes to tactics. She’s more like Bobby wearing her battle armor in The Expanse than a ninja, although Lem doesn’t have any such battle armor. She’s just lucky I guess.

Bereens is the disciplined soldier. Much to his dismay, he pairs up with Lem. They’re the “good cop, chaotic cop” combination but soldier style. Previously a prisoner of war, Bereens brings a lot of baggage to the partnership. This becomes most evident when their enemy – a space Nazi determined to purify this universe – imprisons them.

Cinta is a space Lemur. At thirty years of age he’s just a kid still, bringing lemur-like qualities to a sapient somewhat human-like species. Cinta is Lem’s foster-brother, and feels a strong bond with her. This inspires him to reckless actions in the hope of rescue.

In this multi-species universe not everyone is humanoid. Significant relational issues arise resulting from species’ genetic differences that result in a wide range of behaviors and reactions. This can be entertaining while reflecting contemporary bigoted human behavior arising from much smaller differences.

Space Nazis want to “purify” the universe in the short term. In the longer term they aim for a homogenous genetic and cultural pool to “prevent further conflict”. Knowledge of their aim for short-term purification is widespread. However, it appears that their longer term plans are not yet known. Hence a neutral zone exists and it’s not Nazis vs the rest of the universe – yet.

This far future story has some inventive technology. Some creates suspense. Other technology is sensational and – for me anyway – annoying. People literally walk through flexible walls. Some walls are available for walking through while others aren’t. I’m not sure how people know which is which before they walk into a barrier. Also, you wouldn’t know what you’re walking into.

This silly use of technology has equivalents. In the most recent season of Star Trek Discovery, for example, there are chairs suspended by some kind of anti-gravity technology. This is both an extravagant waste of energy and a recipe for accidents in the event of power outages.

Sometimes writers decide “this is cool” without thinking through all the potential problems that are excellent reasons to not use a technology. In Neodymium Exodus‘s case, I see the potential for these special walls to conceal top secret spaces like the children’s home. However, general usage? Hell no.

Still, Finelli is creative regarding technology. I look forward to reading her future creations.

Neodymium Exodus is a space opera in the true sense of the word. This is a series so, to reach a truly satisfying ending, readers must follow the entire journey. It’s complicated with characters’ backstories unfolding during chapters focusing on them. The action can be kick-ass at times. However, the plot features some moments “because melodrama”. For example, the Nazi boss says to toss key characters out an airlock but an underling rescues them with impunity. If you’re looking for an action-based melodramatic space opera series, this book could be your jam.

If you enjoy The Expanse books you’ll probably like Neodymium Exodus. Hopefully Finelli won’t turn one of her key characters into a zombie. The less said about Zombie-Amos the better. Shark-jumping water skiing trip, anyone? 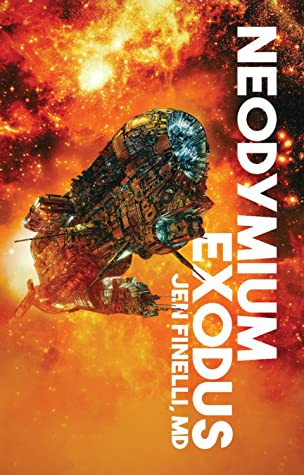