A commentary with spoilers and puns by Edward and Nalini Haynes

There are SERIOUS spoilers and TERRIBLE puns. You have been warned.

To recap: Andy Brooks (John Cho), the guy who sold the human race out for what, exactly, now wants to help Abbie (Nicole Beharie) for no apparent reason.

The headless horseman is chained in a UV-lit room so the minion says, “That’s what you call a bright idea.”

Even with everything our heroes have, the headless horseman is still standing. Literally.

Ichabod and his sense of humor…

Irving observes that the horseman probably won’t talk if they try to interrogate him.

Banter, recap, explanations… And Ichabod observes that Brooks has unrequited feelings for Abbie, motivating him to be helpful… in spite of being the headless horseman’s mouthpiece.

Hunters find Death’s horse. One makes a call speaking in German then shoots the other guy because the Hessians are such warm, lovable characters. (At least Sleepy Hollow isn’t racist against people of color, just against white people who speak a different language. Because we can’t have straight white American villains, can we? [snark])

Irving talks to Jenny. He’s a true believer in the supernatural now.

The dialogue jumps from one place to another as if the characters are making up their minds about their positions and motivations mid-sentence.

Ichy says, “These are Egyptian hieroglyphs.”

I leap off the couch.

Crane says Brooks is the Horseman’s voice. Brooks agrees. So why is he continually switching sides? OMG.

Brooks says, “Abbie please don’t make me do this.”

Abbie says, “You said you wanted to help me.”

Brooks: “I do but you have to understand the decisions I made when I was alive I can’t take back… Confronting Death leads to nothing but misery…”

Minion says, “It’s a bit of a dead end. You know what it’s called when you ride the headless Horseman’s horse? Catching the red-eye.”

In the antique shop things are a bit suspicious: there’s been a break in. Jenny opens the secret door to find a wounded man who says, “The Box did they get it?”

The wounded man says the robbers spoke German so Jenny decides they’re Hessians. Nice that they’re not demonising all Germans only the ones in Sleepy Hollow. And at least they’re not Arabs or something.

Itchy enters the horseman’s prison after Brooks warns him yet again.

The horseman is standing on a Celtic knot. I think it’s the knot that relates to love. Interesting. Perhaps Thomas Jefferson or Itchy are in love with Death.

Death drops a necklace that Itchy picks up. Brooks says it belonged to Katrina.

If Ichabod Crane is Itchy, that makes Abbie Scratchy, right?

Now we flash back to Ichy helping his best friend choose a very expensive gift for Katrina because he, not Ichy, was betrothed to her.

Now, instead of posing as a Quaker, Katrina is a woman in fine and elaborate clothes, wearing jewelry and another low-cut gown.

Ichy gets sidetracked over the necklace while Abbie says “We need to stay on point”.

Cut to power grid where electrical workers are carrying hefty guns because those pylons are sneaky and violent. Irving and Jenny are watching them for no apparent reason. I asked the minion if we know why Irving and Jenny are there. Minion says, “Because reasons” adding a comment about backup or the lack thereof.

Ichy and Death have a pissing contest with Death using Brooks’s voice.

Ichy talks a bout death’s mission as if Death has a superior commander while acknowledging that Death was sidetracked from his orders.

Death says Crane was his mission then (250 years ago) and now.

Minion says, “He’s playing with Crane’s head because he can’t play with his own.”

Irving and Jenny now have back up although there’s no justification for any of them to be there, no clues sending them to the power plant. Jenny finds traces of a bomb just before the power station blows up so the town goes dark just like in Les Revenants.

Without the UV lights Death grows stronger. Abbie says Ichy can’t talk to Death until he tells her what happened.

Abraham is distracted because Katrina broke up with him just before Ichy and Abraham walk into enemy territory. Abraham draws his sword in enemy territory to duel Ichy. ABRAHAM IS SCRATCHY. Mystery solved.

Death shoots Abraham just before he kills Ichy then more redcoats ride in. Ichy flees to deliver the declaration.

Irving and Jenny show up and they discuss plans. There’s no sign of Andy Brooks. The minion doesn’t know what happened to him either.

Minion says, “This series is very industrial. There’s a Crane in every episode.”

OMG the puns, the puns. He’s getting worse because he knows I’m writing the puns down instead of trying to ignore them!!!

Oh, there’s Brooks. Sitting in the cell pulling an artifact out of his belly. Now he starts his Druidic incantation, the one that Jenny just told us about, two minutes earlier. Sleepy Hollow doesn’t care about Chekov’s gun, they arm actors just before the gun goes off.

Jenny and Abbie are in the corridor. Supernatural creatures leap at them from both directions. They shoot. The creatures fall apart like Replicants from Stargate: they’re Lego creatures!

Ichy asks what Death’s unfinished business was only for Brooks to say in his Darth Vader voice “now Ichabod you will learn” then Death frees himself to take up arms or swords against Crane.

I’m not sure how Ichy recognized Abraham but Death is Abraham turned redcoat.

Apparently Moloch turned Abraham into death because the series didn’t need a Death before Ichabod and Katrina declared their love for one another.

“He’s given me what I always wanted,” says Death.

“Revenge is not what I wanted. It’s Katrina,” says Ichy.

Death is about to strike the killing blow. Brooks says, “Stop! You can’t kill him, the master forbids it!”

Then demons appear, grab Death and Brooks and vanish them, leaving Ichy alive.

Ichy dwells in self pity.

Ichy and Abbie meet at the bat cave for a cup of teabag tea and a conversation.

So… Ichy and Katrina married before Death killed Ichy but Death isn’t allowed to kill Ichy…. DOES ANYONE ELSE SEE A SNAKE EATING ITS OWN TAIL?

NO ONE TOOK 2 STEPS BACK AND SAID “THIS STORY MAKES NO SENSE”???

Brooks declared himself to be the Necromancer but actually Death is Brooks’s Necromancer because they’re both dead and Brooks is Death’s puppet not the other way around.

The story will continue… 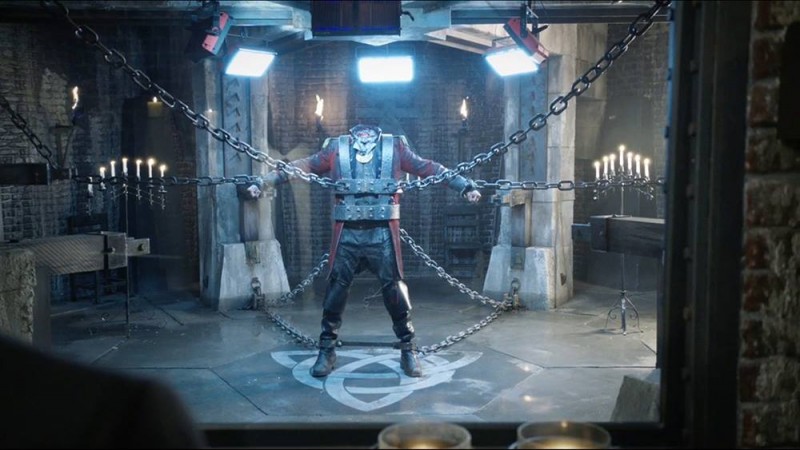