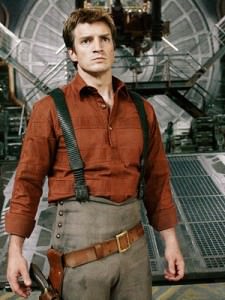 Ever heard the saying be careful what you’d wish for? Well, Nathan Fillon may well be wishing he was more careful with his off the cuff comments made in public. Mid-February, just after a rerun of Firefly was announced, Nathan Fillon (Malcolm Reynolds in Firefly) said if he won the lottery he’d buy the rights to Firefly. Fans jumped on this comment straight away, starting a Facebook page and heading up a campaign to raise the money to help Nate buy the rights.

I am writing this about a week later, and the facebook page already has over 58,000 fans supporting a campaign to help Nate buy Firefly as well as spearheading a larger campaign to raise awareness ready for pledging of funds.

It doesn’t stop here. My teenage son (MTS) told me about the campaign this morning, and mentioned that some writer had pledged to donate some of the proceeds from the sales of his next book towards the campaign, calling on 20 or 30 others to do the same thing. MTS couldn’t remember any of the details, so I asked him to send me links. A little while ago he came back to talk to me about it again. Apparently he’d done some more digging and the book to which the writer was referring was his second in a trilogy but MTS didn’t know what the trilogy was about.
MTS had decided that he was interested in reading the trilogy but he didn’t know what the first book was called, and had only the vaguest idea of what the book was about. I asked for the writer’s name. MTS wasn’t sure, he thought it was Patrick Rothuss or Rofus, which name I thought was kind of familiar. I asked him to look it up, but as I asked that all-important question I got up and walked over to the pile of books publishers have sent to me to review, and near the top of the pile was a book called Name of the Wind by Patrick Rothfuss (I’m expecting the sequel any day now). MTS looked somewhat bemused and pleased at the same time, taking the book from me and assuring me that yes, this was the author, and this was the first book in the trilogy. MTS started holding the book somewhat possessively, leading into his next question, ‘Can I review this book?’

I refrained from rolling on the floor laughing. Determined to pass on my love of good books to MTS, I have spent a great deal of time and effort seeking out and securing books that MTS is interested in reading. My efforts have been successful at times, with purchases like the Song of Ice and Fire (Game of Thrones) series by George R. R. Martin and books by Heinlein, but many other books gather dust unread in MTS’s bedroom.

Many is the time I have used bribery or blackmail to secure a review or article from MTS, like any parent trying to get a chore completed. Bribery includes offers to buy more XBox games after I have reviews for the ones he already owns. Blackmail includes disconnecting that cat 5 cable until I have that review/article because the deadline for publishing looms nigh. And now, off his own bat, MTS offered to review a book, well a series really, because he knows that reviewers get to keep their books. Plus MTS knows if he reviews it, I won’t have to rip it out of his loving hands to review it myself. All because Patrick Rothfuss has offered to contribute to the fan campaign to get Nate to buy the rights to Firefly.

Dark Matter fanzine (on Facebook): It looks like the push to help Nathan buy Firefly is dying because of the celebs connected to Firefly having concerns about scamming and processes. Gail Berman says she had to axe the original Firefly due to lack of ratings – but that’s the same old story, axe now, then scratch heads later over huge DVD sales. One site says if Dr Horrible 2 can’t get off the ground, then nor can Serenity 2. What are your thoughts?

One can’t really compare the two, being that they have different origins in their medium. The success of Firefly has been proven time… and time again, but what I feel they should do is target “smaller” networks that would be more willing (and need the ratings) and that are on both basic cable/satellite networks.

The Firefly Franchise has great notoriety and the internet has helped a lot as far as keeping the fans up to date on the goings on.

The value of “word of mouth” or better yet “word of web” is intangible nowadays.

Erik Blaze: The Big Plan to actually buy the rights was scrapped about two weeks ago after an apparent tweet of non-support from Whedon-associate Maurissa Tancharoen. Before that, Nathan Fillion himself had pleaded with fans not to send money. For now… this page is about funneling money to related charities.

However, despite the apparent setback, I think even the creators of the movement might concede that the idea of purchasing Firefly was partially a bluff intended to get Fox or anyone with “cashy money” to take notice — to see that there was a pent-up demand for more of the show built up after nearly a decade of new fans learning about it.

The fact that the page was for a time gaining more than 1000 “likes” per hour before being deflated speaks volumes about the lasting impact of the show. The fact that we were successful before in getting the film made has kept the hope alive that we may one day get more. As the geeks who brought back Star Trek in the 70s can attest, the power of fandom cannot be dulled by time.

Péter Szombati: The point of this group after Nathan Fillion’s comment on it, was no longer raising money, but to show how strong Browncoats are.

Lester F Alkins Jr: ‎@Eric–The Big Damn Plan wasn’t scrapped. From what I read it’s in a holding pattern. In the mean time there is an art contest going on so that we can make t-shirts, bumper stickers, etc. to promote the cause and raise money for Kids need to Read. I think this is the first new step in a new BDP. Keep the faith and keep checking in here.

Kevin Hare: Several positive outcomes from the plan. It gained awareness and drove a few more sales of the DVD, brought new people into the fanbase and made people think about resurrecting the series. Even if the thought was a small one, shaded with a… ‘can’t be done’ filter, at least the show still has a chance. It also generated a few thousand dollars for Kids need to read and showed the sceptics that the fanbase is, for the most part, a group of reasonable human beings who just had the wits to know a good show when they saw one. It’s obvious the actors, producers in Firefly loved the show but whether they would come back and do it if Fox resurrected it is another story.

Michael Hyatt I really don’t see why you guys don’t throw your weight behind that director Zachary’s Into the Verse web series. It would at the very least, keep the ‘Verse expanding

Kevin Hare Liked the dynamic of the original group, the way it was unfolding and expanding, the writing and liked every character, want them back. Expending effort into web series, or spin off stories disperses group energy. What if instead of web series, they came up with Bring back Firefly commercials, ran campaigns. People going in different directions rarely get to where they’re going. Here’s what I don’t understand, why over 115,000 here, and only 39,000 on ‘Bring back Firefly group’ Doesn’t make sense.

Roger Kea: I agree that group cohesion and direction is a major problem. I created a poll over at the science channel’s Firefly forum so that our numbers can be counted by a studio no matter where you hang out otherwise, but that has met with some resistance because of the need to register.

Currently writing a group effort ongoing parody with other HNBFF posters as well in an effort to give this group something to do while we wait. Please look at the song and Kelly Levans parts they are priceless!  If Into The Black shows promise, I’d be up for supporting it, but the Redemption project kind of hurt future productions in my opinion. I applaud their efforts, but you have to make material that follows one of the most beloved shows ever. Tough act to follow.

Of course I say that while writing a parody for the same fans. Thing is, your imagination takes care of the production values and acting. We just have to provide words for you to plug in to the characters in your head.

As for HNBFF being popular, while other fansites are not, it’s just the popular place to be right now. I tried to get that poll going while the fervor was strong, but didn’t know how. By the time I got it going, the HNBFF thing melted down the next day.

This is a golden opportunity, to reach a lot of new people, so keeping this group involved is key.
Into The Black may be that project. I’ll keep watching it.

Clearwater Sunshine ‎@Roger, I voted, and I think what you were trying to do is awesome!

You must watch ‘She don’t like Firefly’:  good music, good clip and awesome lyrics.

This article was previously published in Dark Matter issue 3, April 2011, and predated on this website to reflect the original publication date.  UPDATE: two years later, MTS nags me to read Rothfuss on a regular basis.  I would have but his books are so large, I have so many to read, and let’s face it – his series isn’t finished yet!  MTS reads Rothfuss though, so I’m happy.  The community that grew in the hopes of helping Nate buy Firefly are still active although they’re not fundraising for the original goal – Nate back-pedalled and declined.