The Nancys introduced Chinese Kiwi Tippy Chan, her white uncle Pike and his boyfriend (and possibly a person of color) Devon. They formed the Nancys to investigate a murder in the small town of Riverstone. Well, several months later there’s another murder so Nancy Business is afoot.

Yoast and Google like at least 300 words. In theory at least, I’m not supposed to copy and paste from my first review. So I’m trying to figure out what else I can say without actually telling you what happens.

Pike and Devon are queens. TOTAL DRAMA QUEENS. (Not sure if they’re gay-terminology-queens because I don’t know what that is any more: things change so fast.) They’re just as hilarious as in the first book. Despite my loathing of melodrama, I still love them. With the caveat that McDonald had better not pull that stunt again. You know what I’m talking about, Rob. [glare] I bet you read this review so I’M TALKING TO YOU.

Let’s just say I’m attached to this couple although I’m so unfashionable that in real life they’d either ignore me or deride me. I guess that’s one of the virtues of fictional characters: they can be friends when in real life we wouldn’t be on speaking terms!

Tippy is still the point of view character, with her naïve reporting of events providing some of the best humor. Occasionally she seems to slip, becoming a little more capable or more knowing than I expect. Then I think back to what I was doing when I was 12. Tippy is totally believable.

I wondered about Tippy’s dad’s death in book one. Seems that McDonald seeded that for a trilogy. I look forward to book 3 although I’m already convinced I know whodunnit and why. BUT THE JOURNEY IS SO MUCH FUN, I don’t need the suspense. And there’s an outside chance I’m wrong but I don’t think so.

Nancy Business still gets 5 stars (although if Macdonald repeats CERTAIN EVENTS from the second book, I WILL HAVE WORDS. MANY WORDS.) It’s the best combination of humor, romance, murder, humor, and character work (and did I mention humor?) of any novel I’ve come across in this genre mashup. And did I mention character work? These books are special.

The original novel in this series won a swagload of awards and shortlistings. I expect this novel will also receive accolades.

The Nancy books are so special that, although I’ve donated many many boxes of books to the Lake Tuggeranong College Library in an attempt to fit my possessions in my new house, I’m keeping the Nancy books. Maybe one day when the pandemic is over I’ll meet the author and get him to autograph them. Dreams, amiright?

Rob McDonald, the author, appeared on Dark Matter Zine’s podcast when he was contributing to the Authors for Fireys fundraiser. 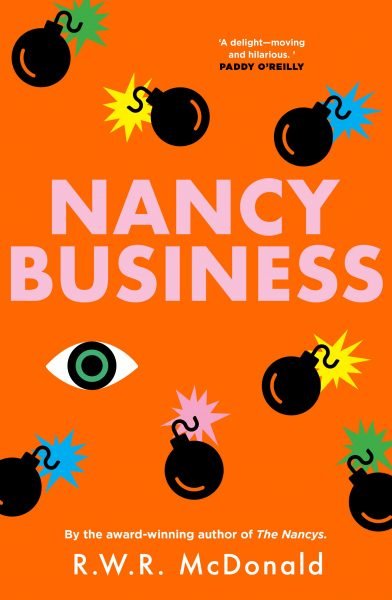