Updated. Twice. Because I should never rush a review. Now includes mention of queerness and race.

Che Taylor turns 17 just as his parents, Sally and David, drag him halfway round the world to New York. He’s Australian but, since he was 12, his family has moved house, moved city and moved country regularly.

Since he was 7, Che has looked after his sister, Rosa. Rosa has developmental difficulties that lead Che to believe she’s a psychopath. Che feels isolated: their parents don’t believe him and no one else sees Rosa frequently enough or consistently enough to see under her veneer.

Che’s list for the coming year is to control Rosa so no one gets killed. Rosa killed creatures — ants, moths and the like — until Che made her promise not to kill any more. Rosa treats her promises to Che like a game: she wins if she does the forbidden thing without breaking a promise. So Rosa bullies her best friend into killing her own guinea pig, a pet she loved. Then the family moved, again.

Like most teenage boys, Che wants a girlfriend, preferably with sex. He trains at a boxing gym and wants to spar; his parents made him promise not to until he’d stopped growing.  He also wants to go home to Sydney.

Che is attracted to tall, muscular girls, the type who train at his new boxing gym. One girl stands out: Sojourner, aka Sid.

Che fears that Rosa is a murderous psychopath but hopes she’s not. He walks a line between trying to protect the world from Rosa and trying to protect himself from Rosa. In this day and age of CEOs and bankers giving themselves multi-million dollar Christmas bonuses and golden handshakes as rewards for crashing the economy and denying the lowliest of their employees a living wage, Larbalestier’s discussion of psychopathy is important.

Suspense is built on the fear that Rosa is going to kill someone. Che relays his research to justify his inaction: contemporary thought is that most people with anti-social personality disorder don’t kill although they are without empathy, acting based purely on selfish instinct. Some carefully craft a cover, a loving family, as a disguise. These people can be businessmen, politicians, managers, ministers and partners. Through Che, Larbalestier discusses our responsibility to warn the innocent to keep them safe. Larbalestier also exposes the people that can be their family, their victims, their survivors.

My Sister Rosa includes the most beautiful representation of queerness in a few of its forms: parents in love, teen love and a gender-ambiguous person.

Sojourner’s parents, a queer couple, are representatives of the best kind of Christianity. Che attends an interfaith church service where they preach love, true love, and don’t discriminate. One of Sojourner’s mothers is a minister in the church. This is a huge contrast to the only church service I’ve attended in Canberra where the minister preached that homosexuals are the new gentiles that the church needs to include, like with the gentiles in the New Testament church. However, he also said the church only welcomes married couples (homosexual marriage is not lawful in Australia). In contrast, Larbalestier’s church preaches love.

I didn’t realise at first that Sojourner is African-American and, when I did, she grew more beautiful. The wealthy family who sponsors Che’s family living in the America is half Korean: the father is Korean but was adopted by a white family when he was a child. His adopted family raised him to respect his culture, speak his language and stay in touch with his Korean family. His half-Korean daughters grew up also valuing their mixed cultural heritage. At one point, this racial combination sparks discussion in the YA set.

My Sister Rosa is a psychological thriller that kept me on the edge of my seat, reading from start to finish this morning because I had to know what happened until I finished less than an hour ago. The sense of impending doom overshadowed all. It will take some time to truly absorb My Sister Rosa and more time to recover.

My Sister Rosa is an excellent psychological thriller featuring diverse characters; it’s a page-turner that happens to fall into the YA category. Highly recommended for audiences of all ages (as long as they’re not too young).

FYI: the picture on the cover should be a butterfly, not a bird. Just sayin’. 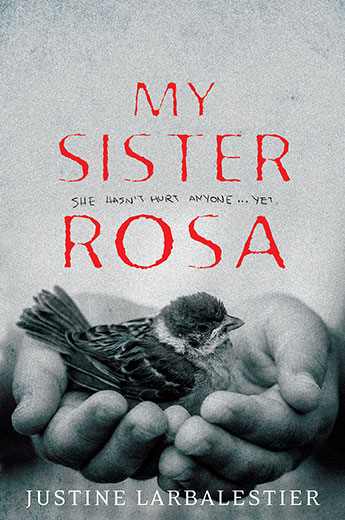