This post is intended to help people applying for NDIS support (Australia’s National Disability Insurance Scheme). Some of what I learnt on the way through can be applied to any application for support, not just for a seeing eye dog.

Following on from my post earlier this week, my head is clearer. And I’m REARING to go. Plus I just happen to have this draft that I prepared earlier. Like, 15 days ago! If you’re interested in why I got stuck with this in draft mode, read One Year Anniversary.

My second NDIS application was really stressful and took months to put together. Looking back, I think I have some tips that might help others with their applications. Because I definitely learnt a bit along the way!

I think it was March when Jane, not her real name, contacted me to help me with my application. Jane has a 100% success rate and jealously guards that statistic, which I initially felt was a problem. The NDIA is responsible for approving or rejecting applications, not Jane. So hubby and I PUSHED to be allowed to apply. In hindsight, we also had a personality conflict – misunderstandings – but persevering and working together got the job done.

Listening to Jane’s input, pondering it, then working out how to include the facts I thought crucial into my application was really hard work but very worthwhile.

Because the NDIS rarely approves seeing eye dogs, I knew it was essential, CRUCIAL, to include as much supporting evidence as possible.

My optometrist and physiotherapist both supported my application for vision difficulties and cane-induced-RSI reasons.

I could justify the need for work: a seeing eye dog would help my work on Dark Matter Zine, enable me to attend literary festivals and conferences as well as function independently daily. And having a seeing eye dog INSTEAD OF a human carer would be MUCH cheaper when you factor in support, travel and accommodation away from home for a carer.

However, that may not have been enough.

The NDIS form asked for information about who I’d sought assistance from and what alternatives I’d tried. Jane would not allow me to say

“Guide Dogs’s Orientation and Mobility trainer insisted I use a longer cane. This resulted in being housebound for 3 weeks with RSI. Then she insisted I use that same longer cane with a heavier handle that resulted in me being housebound for a month with RSI after only 45 minutes of training with that cane, and almost crying with pain during that training.”

Jane’s reason for refusing to include that in my application was that it was a negative story about a different agency. Therefore she could not confirm the story by signing off on it. Plus the NDIA (the agency controlling the NDIS) may disapprove of agencies “sledging” one another.

Finally we agreed on completely different wording that assigned no blame but conveyed stark facts. Essentially, I explained that I’d had assistance from the RSB (Royal Society for the Blind) in Tasmania and the separate RSB in South Australia and Canberra, from Guide Dogs Victoria and Guide Dogs ACT/NSW, and Vision Australia over a period of many years. Because I was diagnosed as vision impaired at 6 months of age I have a lifetime of lived experience of disability and trying to find ways to cope, especially with my current deterioration of eyesight.

Also, I’d tried the cane and had repeated Orientation and Mobility (O&M) training with that. The cane I use is too short. And although it’s too short I do not hold it correctly in order to reduce the RSI strain and pain, which effectively makes the cane even shorter. Use of a longer cane resulted in being housebound for 3 weeks in 2018 and a month in 2019. Furthermore, I tried a hand-held radar that was helpful for objects like walls but does not help with trip hazards, curbs or steps. I think I even cited experts on the necessity for a cane or dog even when using echolocation.

Don’t get me started on Daredevil, I’ve already had loads of internet arguments about that. They usually end with the nondisabled person saying “well at least you have representation even if it’s bad”. Grr. Argh.

Let me spell this out clearly: the NDIA, on behalf of the Australian government, spent close to $100,000 on leasing a seeing eye dog, training and equipment etc., BECAUSE THEY UNDERSTAND ECHOLOCATION IS NOT SUFFICIENT FOR SAFETY. And just FORGET about Daredevil’s “radar” that exceeds even the best level sonar technology in perceiving fine detail. THIS IS FANTASY. DAREDEVIL IS WHAT WE GET WHEN AUTHORS MISAPPROPRIATE DISABILITIES AND DON’T DO THEIR RESEARCH. Rant over.

My application also went in to how I want INDEPENDENCE. Because the agency delegated with my case management is keen, nay, EAGER to provide a human carer on their staff/contractors.

(Yes that’s right: there’s the NDIA, plus a separate agency they delegate to, AND Seeing Eye Dogs Australia [SEDA] all involved in my case management and every approval process. THREE AGENCIES. Because streamlining and saving money isn’t a thing when it comes to throwing $ at non-govt service providers of what should be govt-provided services. SEDA/Vision Australia excluded, of course: they’re a specialist agency.)

What you need to remember for your NDIS application

The most important takeaway from this is that I named all the agencies from whom I’d sought help over my lifetime. I included ALL technologies and alternatives I’d attempted and why they weren’t suitable. Also, I listed problems with possible solutions and injuries I encountered, stated as facts separated from agencies and disconnected from individuals.

And my primary focus was communicating how a seeing eye dog would help me function, help me work on Dark Matter Zine, and help me support the arts industry (literary, screen, etc all bundled into one).

Tim Ferguson (comedian and screenwriter) says the most important point to remember when applying for NDIS funding is to focus on how this funding will help you live your life. That’s the Doug Anthony All Stars Tim Ferguson who has acquired a disability and become a vocal activist! Tim also teaches writing, comedy and screenwriting. I took one of his short courses online last year and it was a highlight of my year!

My final word on my NDIS application

I digress: back to my NDIS application: I also built in an unstated but obvious point that providing a human carer to help me do all of this – daily living and working on Dark Matter Zine – would be much more expensive than a dog.

We submitted my application for a seeing eye dog from the NDIS just before the end of June. NDIA staffer phoned me to discuss the matter then told me she approved funding in early August, so about 5 weeks later. I tried not to deafen the poor woman with my squees of joy.

My husband wasn’t so lucky when I phoned him. He was at the office: this was just before our August 2021 lockdown began. I suspect half the office heard me over the phone!!!

The next wait began 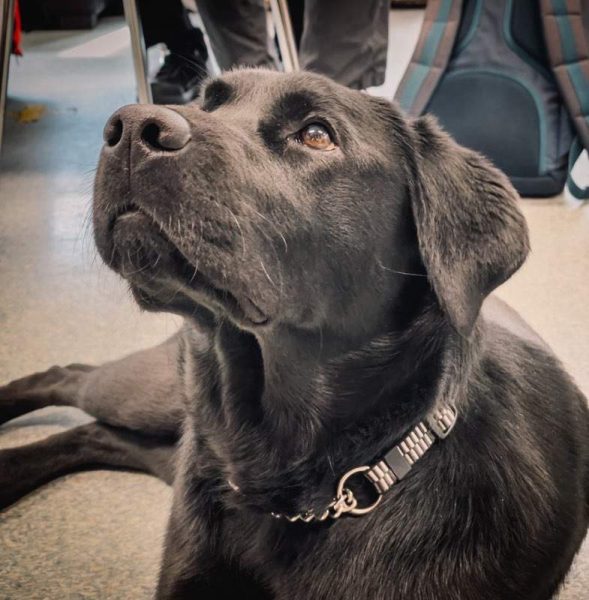 Then I had to wait to be matched with a dog AND I had to wait for pandemic-closed state borders to open. My dog was coming from Melbourne and the Victoria/NSW border was closed FOR MONTHS. And then there was the ACT (Canberra) border that, admittedly, is much more porous with NSW but still.

It was about October that Seeing Eye Dogs Australia (SEDA) phoned to discuss a specific dog with me. This dog’s name is Silkie and she was already in foster care because she’d finished her training. The next 3 months were SHEER TORTURE while I was waiting for SEDA to catch up with their backlog of dog delivery and handler training.

Then, in December, they said they’d bring Silkie on 25 January.

(The featured photo was provided by Caitlin of Seeing Eye Dogs Australia. Who could turn down such an adorable pupper? OF COURSE I SAID YES. Without seeing her or the photo!)

But, in January, the SEDA trainers were worried that the increasing covid wave would result in borders closing again. So they brought Silkie early; she arrived on 14 January. I’d already cancelled my entire life because I didn’t want to risk getting covid and not being able to train with Silkie so I. WAS. AVAILABLE.

My next installment will be a blog about some of the training then subsequent installments will mostly focus on daily life with 2 cats and a working dog. I have so many funny and charming stories to share. I am besotted. So stay tuned!

If you’re interested in learning more about Seeing Eye Dogs Australia or even donating to support raising and training a puppy, please go to their website.