Once upon a time there was a guy called Murphy who, common knowledge would have it (in spite of several other theories) was a engineer testing prototypes during World War II. His experience in Research and Development led to Murphy’s law, typically stated as: Anything that can go wrong, will go wrong. At the worst possible time.

One or two things may have gone a teensy bit wrong in this episode of The 100.

While Abigail and Raven struggle to find parts on the ark to repair a drop ship to investigate the 100’s landing and to communicate surface conditions to the ark, the settlement is getting organized.

Teenagers are building a defensive wall. I thought they were building teepees but character dialogue confirms it’s a wall. However, it’s not nearly as epic as The Wall in Game of Thrones.

Jasper finds a knife near two fingers just outside camp; knowing what actually happened when Wells was murdered, this find is both macabre and surprising. It left me wondering if they’d resorted to cannibalism already. No explanation for this dismemberment — dis-digitization? — has been given to date.

Clarke accuses John Morgan of the murder because his initials are scratched into the makeshift knife’s handle, he’s threatened to kill people and he’s physically attacked people before. It’s a reasonable assumption; John’s righteous indignation is a classic symptom of psychopathy or self-delusion.

Bellamy tries to prevent Clarke sharing her suspicions with the larger group so they stay motivated to work together. She ignores him and charges out to declare John a murderer. When a lynch mob tries to kill John, Bellamy joins the in, only to be undermined by Charlotte’s screamed confession.

Cue Lord of the Flies mayhem.

Meanwhile on the ark, black marketeer Nygel (Saidah Arrika Ekulona) rats out Abigail for uncertain reasons. She gives Marcus Kane (Henry Ian Cusick) evidence that Abigail came to her for goods. He’s tried to take down the black market for years but he goes after Abigail not the black marketeer.

The end of the zode is partly ironic, partly ‘guess who’s coming to dinner’ (Terry Pratchett style). Relationships will be complicated in the future.

In spite of several female leads, it’s Abigail and Raven and their interactions with Nygel who are the only reason this episode passes the Bechdel Test. Not even Clarke and Charlotte get it past the line because they’re always in male company. And they’re focused on Wells’s murder.

The story is holding its own so far, keeping me engaged although it’s predictable. I hope writers will dream up some actual surprises in the future. I’m still giving The 100 4 stars for its execution and the fact that some storylines in a Lord of the Flies stranding set in a post apocalyptic future are inevitable. 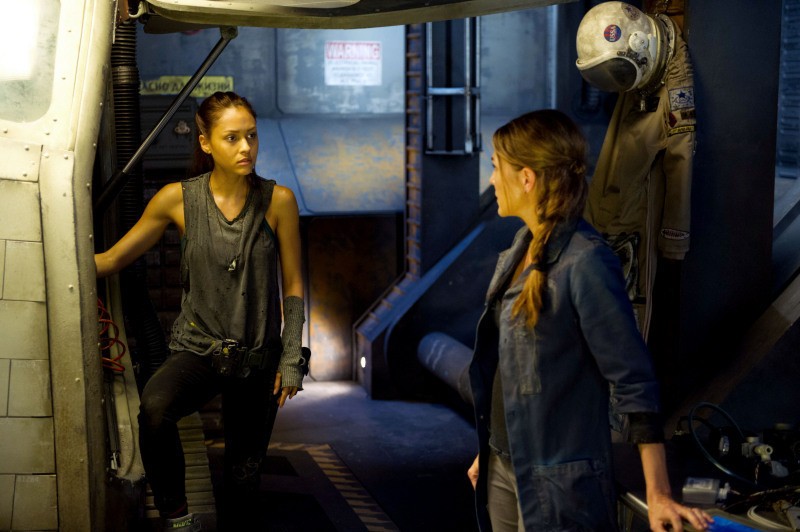