Indigo of the multiple-hyphenated-names is an heiress who, in the first novel, proved she wasn’t guilty of murdering her husband. Now, in her second adventure, Dame Elizabeth (Indigo’s grandmother’s best friend and neighbor) asks Indigo to identify a corpse found in Grandmother’s back yard. It appears a Murder Most Fancy took place although the victim dresses like a homeless person.

Esmerelda is a gorgeous Asian Australian woman rescued by Indigo’s mother. Currently masquerading (badly) as Indigo’s personal shopper, Esmerelda meets her parole conditions. I thought models pretty much needed to be 6 feet or more, so it surprises me that Esmerelda is such “model” material although only 5 foot 10 (hold my beer).

There are a few other characters whose descriptions imply various ethnic groups without racism.

Dr Jem Bailly, a forensic pathologist, is so literal that she appears to be on the stereotypical autism spectrum. Although this abrupt and brutally honest specialist may offend some readers, I love her.

Indigo enjoys a romantic triangle with 2 hunky men, and attractions to a few others. Murder Most Fancy is one of those books: the protagonist has all the money, all the love interests, all the shiny things. It’s unrealistic superficial FUN not intended to be taken seriously.

However, author Kellie McCourt draws the line at actual sex. Indigo allows her love interests to cross all sorts of boundaries but, like Bill Clinton, seems to be of the opinion that heavy petting is not actual sex. I suspect this line is drawn because, in this trope, penetration equals a choice, a decision. And, true to this trope of sexy murder mystery investigation, Indigo won’t make a decision until the end. The end of the SERIES. Unless drama demands it.

Indigo spends so much time shopping for herself that you’d think it was a novelty. Admittedly all her worldly possessions died in a fire but still, surely even an heiress would get sick of spending money all her days? Maybe that’s just me. Hm, yeah, I’m sure that says more about me than about women in general.

Murder Most Fancy is intentionally an escapist “fantasy” (although not of the actual fantasy genre), enabling readers to live vicariously, dreaming of Jimmy Choos and Manilla Blanks. (Yeah I know I got the name wrong but I CBF looking it up. My opinion of fashion is that it’s a con. And I dislike being treated like a sucker!)

Indigo emphasizes her heiressness frequently. Someone born with a silver spoon in their mouth tends to take things for granted and then be shocked when by differences. (My half-brothers and sister have a millionaire for a father; ask me how I know.) Instead, Indigo’s focus on her status and her ability to shop shrieks of novelty. Which is fine, for a fun beach read.

If you enjoyed Murder Most Fancy and Stephanie Plum, you might enjoy Wicked Business. 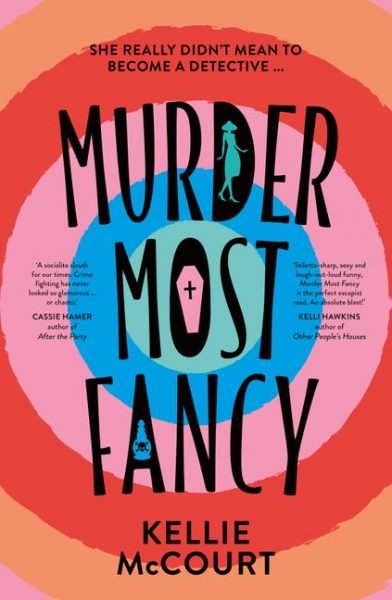