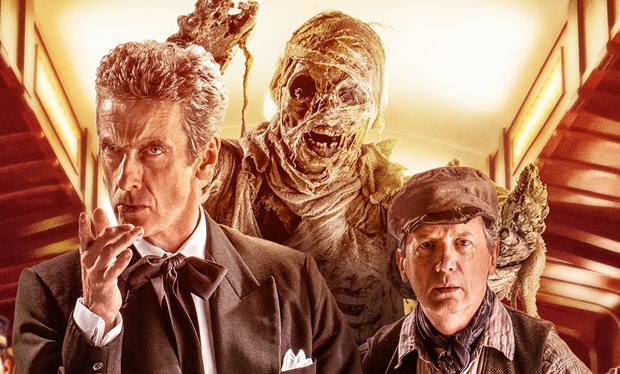 Clara (Jenna Coleman) has decided to part ways with the Doctor because she was so angry with him about being forced to decide whether to kill the moon-hatchling. As a ‘last hurrah’ they’re taking a trip on the Orient Express, a faithful reproduction of Agatha Christie’s train trip. Except it’s in space. But it does have murders…

An old woman dining in first class sees what appears to be an Egyptian mummy. She demands that it be removed from the dining carriage. No-one else sees the mummy. The mummy gets closer, reaches for the woman’s head — she slumps in her chair, dead.

Another person dies after seeing the mummy.

The Doctor notices that a disproportionate number of passengers are professors and doctors of mythology and science.

Clara helps the deceased woman’s granddaughter to break into a secure carriage to see the body. All it takes is a shoe striking the lock and they’re in. Pity no-one can get them out again. Until the Doctor wants them out, then — hey presto! They’re out. [faceroll]

An engineer crosses paths with the Doctor; they consider each other to be suspicious. He’s conspicuous in that companion-or-villain way so I expect he’s somebody although I didn’t recognize him.

Another person dies. The Doctor starts looking for patterns. The engineer is ahead of him in his investigation. Seriously, was the engineer meant to be the villain? Did I blink and miss the big reveal?

A disembodied voice is the puppet master (again, Steven?). He wants his seconded professional victims to determine how the mummy works so he can reverse-engineer the mummy for future use. Except both his identity and his plans seem to be forgotten in favor of focusing on Clara’s relationship with Danny in the denouement. Unless I blinked? I was interrupted a few times during this episode.

Danny and Clara. Sigh. In ‘The Caretaker’ Danny pleaded for honesty in their relationship, telling Clara that the lies she tells reveals what she thinks of the people to whom she lies. So now Clara is lying both to the Doctor (Danny’s fine with her travelling on the TARDIS with him) and to Danny (I’ve finished with the Doctor). Nothing can go wrong here. [faceroll]

The Doctor is again a ‘caretaker’ in ‘Mummy on the Orient Express‘. Clara is shifting to be a doctor instead, while seeking affirmations from the Doctor.

The Doctor has lost skills like the ability to interpret facial expressions and people’s ages; the frequency with which this ancient and experienced being dialogues on these inabilities is an obvious ploy to secure Sheldon (Big Bang Theory) fans for Doctor Who. I get that Sheldon watches Doctor Who and it’s nice to reciprocate in some way. I get that people on the autism spectrum need iconic pop culture icons. I like the Doctor as a periodically arrogant character (but spare us the Colin Baker arrogance). I like the Doctor as an irascible, focused, not-necessarily-politically-correct character (and I loved Don Tillman’s problem-solving exercise in the lecture about autism). However, the changes in the Doctor aren’t limited to character, they’re skills and abilities lost in a blatant grab for popularity. Any such blatant grab is a double-edged sword. Moffat needs to beware.

Speaking of blatant grabs for popularity: steampunk in Doctor Who. Although the TARDIS interior is more 80s neon tech and less steampunk than any New Who TARDIS, the Doctor Who intro has been changed to tap in to the steampunk culture. The Doctor’s science-y goggles almost look like the BBC pinched them from the Hogfather‘s set. If you’re going to go steampunk, it needs to be a whole aesthetic or it’s like wrapping a cat-toy in a book box: you’re making a promise you’re not keeping. While I love steampunk, Doctor Who is its own creature: a science fiction show that has crossed genres over decades. Trying to follow fashion in a grab for ratings is a bit disappointing. And what’s with the chalk-on-a-blackboard theme music? It almost sounds like the orchestra is screaming.

Overall, ‘Mummy on the Orient Express’ is one of the better episodes in season 8, more in keeping with Classic Who in spite of still focusing on the Danny–Clara relationship.

“I am the Doctor and I will be your victim this evening. Are you my mummy?”