Hel, daughter of Loki and Angrboda, is born with rotting corpse legs. She remembers her birth well because she’s a goddess. Her brothers are Jormungandr, a snake, and Fenrir, a wolf, who greet her upon her birth. Later she meets more of Loki’s children and she’s not impressed. The Monstrous Child narrates the story of the beginning of the world to the end from the point of view of a very angry teenage girl.

Hel is angry because she’s disabled and because of the way people treat her because of her disability.

Odin hears prophecies of the End of Days, including his death. In an attempt worthy of Laius, Oedipus’s father, Odin hurls Jormungandr out of Aesgard into the ocean where he will grow until he will encircle Aesgard at the end of days. The gods trick Fenrir into allowing himself to be bound until, at the end of days, they expect him to break free and kill Odin. So, knowing that these lads are going to wreak vengeance upon Aesgard, the gods give them motivation instead of, y’know, BEING NICE.

After being kidnapped from her mother’s home, Hel is allowed to stay, homeless, in Aesgard until she’s about 14, then Odin hurls her into Niflheim to rule the kingdom of the dead. Those that he doesn’t want in Valhall. So, effectively, Odin rejects Hel and tells her to rule his rejects in a dank, hostile world. Guess how well that turns out?

Hel’s voice is very teen, very relatable for a lot of YA readers. She’s snarky and quirky and, although her view of the world is unremittingly black, she’s amusing.

It’s just a pity that one of the few representations of people with disability — in this case, someone with only partial use of her legs — is painted as an angry vengeful god who needs to learn a lesson. Also, a problematic issue arises in the last scene. When I think about that last scene, especially in terms of disability, I get angry. Be warned. I had a short rant on Facebook but I won’t go into details here because I’d spoil the ending.

However, The Monstrous Child is to be commended for not talking down to its audience. I noticed one mild swear and, although there aren’t any sex scenes, there is no sugar-coating of Norse gods and their sexual proclivities.

Although The Monstrous Child can be read in the same length of time (or less) than it takes to watch the movie Born on the 4th of July, it’s similar in that ‘things get worse until the last few minutes when, BAM, happy ending’. I prefer progressive character change with motivation.

Written by Francesca Simon, the author of the Horrid Henry children’s books, The Monstrous Child will be a cult classic for teens who grew up with Horrid Henry and who love black humor, especially those feeling displaced due to disability, siblings, blended families and absent parents. 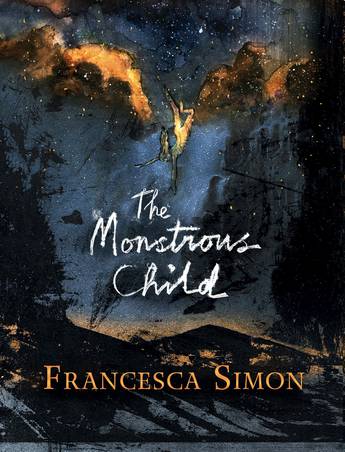