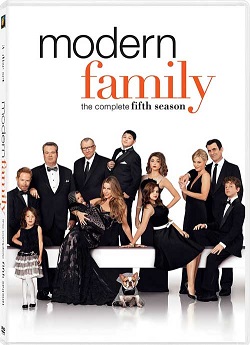 If you haven’t heard of Modern Family by now, my first reaction is to ask where you’ve been hiding. It’s a comedy that has taken the international community by storm with its diverse cast, familial conflicts, comedy and great heart.

Jay Pritchett (Ed O’Neill) is the patriarch of the family — except this family doesn’t really run like a patriarchy. Jay acquired a new wife, Gloria (Sofía Vergara) shortly before the series began. Gloria is Columbian, revelling in her ethnic roots. Her figure, especially the emphasis on revealing her cleavage, attracts male viewers.

Gloria’s fully-Columbian son Manny (Rico Rodriguez) breaks all the moulds; he could be a stereotypical gay kid growing up but he’s straight. Manny sets the bar incredibly high for any wannabe ladies’ teens while enduring peer rejection — until season 5, when his peers’ increasing age shifts the balance of desirable behaviour into a more, shall we say, civilised spectrum.

Lily (Aubrey Anderson-Emmons) is Mitch and Cam’s adopted Vietnamese daughter. Early in the series she’s adorable yet quiet. In  season 5, Lily comes in to her own, with sassy comments delivered with flair. She’s stealing scenes from her dads.

Claire (Julie Bowen) is Jay’s daughter, Mitch’s sister, Phil Dunphy’s wife and mother of their 3 ‘normal’ white American kids Haley, Alex and Luke. She’s been a stay-at-home mum for 20 years and now, in season 5, she returns to work. Over the course of the series there have been times when Claire’s treatment has annoyed me and even made me angry. Claire’s role seems to be managing a chaotic home and taking the blame when she’s in the right or when others are behaving badly, and with little thanks. In season 5 Claire comes more into her own, being treated more equitably with the rest of the family.

Phil (Ty Burrell) is the stereotypical cringeworthy father who can also be a child-man. At times his energy and verve for life is commendable. At times it’s headdesk cringe, especially with a series-long running joke of Phil making comments sounding like he’s gay and in the closet. He’s clearly straight, played for humour, but early on I did wonder. It’s not the humour I objected to; it’s the cringe factor. Same with Cam and Mitch; many episodes rely on cringe humour, often taking Cam and Mitch so far overboard I can’t see the ship for the cringe-waves inundating me as a viewer. There have been times I’ve had to turn off an episode part-way through to return another day. This only happened once or twice this season, however.

Haley (Sarah Hyland) is the dumb girl in the family to the point where I’ve wondered why she wasn’t in remedial classes. In season 5 Haley starts community college and stretches her wings, displaying street-smart savvy, artistic flair and deviousness extending her IT skills. She’s also suddenly more empathic and wise, less self-centred.

Alex (Ariel Winter) is the pin-up nerd girl, brilliant academically, putting herself under great pressure to achieve while acting as Haley’s foil. This season the dynamic duo are far more balanced and far more of a team, which was great to see.

Luke (Nolan Gould) used to be the dumb third child and yet he’s coming more into his own in season 5 as well. He’s a pretty typical boy, liking the stuff his dad likes (magic tricks, pop culture, fooling around) but now he’s not doing so badly at school. His biggest problems are the teachers compare him to his smarter older sister now he’s at the same high school and the girls are starting to appreciate Manny’s debonair attributes while dismissing Luke’s childish boisterousness. On the upside, Manny and Luke are good friends, probably more so than they would be in real life, considering their diverse personalities and interests.

I’ve been watching Modern Family since season 1, waiting for the DVDs to become available because I can’t stand watching all the advertisements on commercial TV. For me to follow this series so closely is an indicator of my love for this diverse extended family, the comedy and the heart.

However, season 5 is the best season yet.

Everyone is growing up. Jay and Gloria have a new baby. The family goes to Las Vegas and Australia. Even better, season 5 has a story arc: gay marriage is now legal. Mitch and Cam propose to each other before enduring the dramas of organising a wedding. Anyone who has endured the planning of a wedding can identify with the dramas involved; anyone who has endured cultural prejudice regarding their upcoming nuptials will identify with the deeper issues at stake.

I have never cried at a wedding.

I actually cried, just a teeny bit, when Mitch and Cam were married, even though it’s a fictional wedding.