A long time ago in a land, far, far away… no, wait. It was this land, but it was still a long time ago… a young boy named Mitchell was introduced to fantasy novels.

I wasn’t a teenager yet, but I read a lot and had progressed from Tintin and Asterix into the Three Investigators and The Hardy Boys books. And I thought they were pretty good. I’d always known about fantasy, as every child does through fairy tales and stories of the supernatural, but when I read The Hobbit and the Lord of the Rings something inside me changed. I quickly progressed to Magician by Raymond E Feist, then Pawn of Prophesy by David Eddings and many others.

Fantasy novels seemed to have so much more. As a boy I didn’t analyze why that was, or the differences between genres. The settings were important, complex and fully realized. The world building was detailed and immersive. Magic systems were fascinating, and in some cases critical to the plot. Battles were massive with more at stake than individuals. I just loved the varied and marvelous worlds, the magic and the characters that had to overcome dire circumstances to triumph at the end – but at the same time had such wild adventures. And worlds were in peril! If nothing was done then evil would triumph. That would not do.

I devoured every fantasy book I could get my hands on. Fafhrd and the Gray Mouser by Fritz Leiber; the Shannara Trilogy by Terry Brooks; The Dragonlance Chronicles by Margaret Weis and Tracy Hickman; The Chronicles of Thomas Covenant the Unbeliever by Stephen R Donaldson; the Harper Hall series by Anne Mccaffrey; The Color of Magic by Terry Pratchett; The Fionavar Tapestry by Guy Gavriel Kay; A Wizard of Earthsea by Ursula LeGuin.

Every book was exciting. What would the characters do next? What wondrous magic would they experience that I, as a reader, would feel through them? Alongside characters great and small, I walked. An invisible companion. A ghost following them on their journey. I ate seed-cakes and buttered scones, and sang with the dwarves at Bilbo’s table. I walked the labyrinthine and crowded streets of Lankhmar. I marveled when I met the mysterious Haruchi and the powerful Lords of the Land. I stood on Mount Doom when Frodo lost the will to destroy the One Ring. I hovered close to Raistlin, where I both despaired at his actions and cheered him on. I sat among the Sea Hold women gutting fish when Menolly sliced her hand open, horrified at the realization she might never play music again.

All of the fantasy books I read were so good. But why? What was it about them that captured my imagination? Was it the tales of wonder and magic? Could it be exploring and getting lost in another world? Was it the fantastical beasts and races, some of which had strange and disturbing powers? Or maybe it was that ordinary people were capable of extraordinary acts of heroism and self sacrifice?

Of course, the answer is: Everything appealed to me.

Fantasy can take you anywhere, and on the extraordinary journey you can come across anything.

And at the end of each unique story you are left trembling and emotional, sometimes exhausted and, more often than not, elated. The world contained within the pages is forever changed – and the reader along with it.

When he was eleven, Mitchell Hogan was given The Hobbit and The Lord of the Rings to read and a love of fantasy novels was born. When he couldn’t stand putting off his dream anymore, Mitchell quit his job and finished the first draft of A Crucible of Souls. It won the 2013 Aurealis Award for Best Fantasy Novel and was listed as one of the Best New Series by Audible for 2014. Mitchell lives in Sydney, Australia, with his wife, Angela, and daughter, Isabelle. 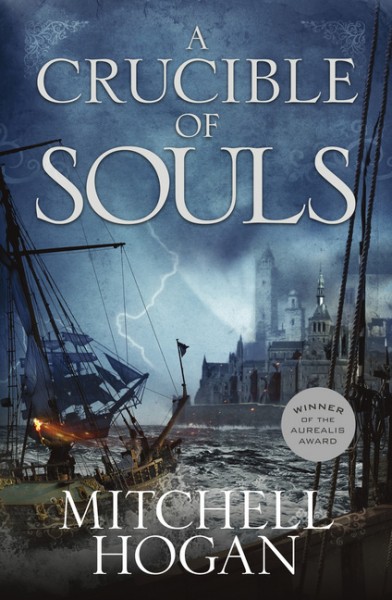