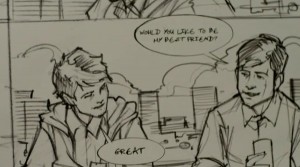 In the vein of Doctor Who‘s ‘Fear Her’ episode and Heroes first season, the Misfits take on a comic book artist. Wearing his mask, Simon saves a guy a mugging, taking a beating for him then rising – bruised and bloodied – to thump the mugger who runs away. Peter, the mugging victim, joins the ASBO-orange team for some group therapy lovin’ only to recognize Simon sans mask because of Simon’s injured hand.

The ever-lovin’ probation worker sees Rudy. BOTH of Rudy. That probation worker is so very caring and concerned, he asks questions. Not. This dude totally reminds me of hordes of people who don’t give a shit about their jobs but in Misfits it’s fuel for comedy.

Peter the comic book guy is unique: he’s strawberry to Heroes‘s chocolate and Doctor Who‘s vanilla. (Did I mention I prefer chocolate to vanilla and I prefer vanilla to strawberry?) There was so much potential with this idea it could have been a story arc. Instead, I was disappointed with how quickly it wrapped up. I wasn’t a huge fan of the ending but the journey up to that point was interesting.

Misfits‘s comic book artwork was interesting, too: more mature than the artwork in Doctor Who and more natural – more convincingly sketched as opposed to knocked up on a computer and printed onto canvas – than the Heroes comic book artist. (I have to add, though, that I loved first season Heroes including liking the artwork.)

Fans will need to see this episode as will aficionados of the genre to compare stories dabbling in similar tropes. I am a fan of drama/comedy stories; the running joke with the probation worker gets a snort from me. Recommended to SF and fantasy fans: getchore TV fix here.