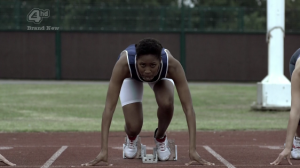 Rudy joined the Misfits crew, increasing their numbers to 5 once more. It’s Rudy’s fault police captured the gang in a stolen car, returning the crew to probation work in orange suits, so I’m surprised they’ve welcomed him into the group instead of, y’know, murdering him and burying the body. Because they’re quite skilled at digging graves.

Kelly starts to see magical-power-man around the estate. As he’s such a patronizing, self-interested git, I sigh at the obvious ‘love interest’ angle but Kelly starting git’s car when he couldn’t? Nice touch. (Notice how I can’t remember his name? I’m sure it’s my subconscious saying ‘No. NO.’)

Curtis is racing to romance in this gender-bending Misfits story. Curtis as his female alter-ego Melissa starts training for athletic competitions because he’s excluded as a guy. He meets a girl – Emma – as both Curtis and Melissa. Emma admires Curtis from afar but not so much close up, discovering he’s disappointing as a companion and worse in the sack. Emma shares her adventure with Melissa who looks shell-shocked before fleeing the change-room.

Stunned, Curtis seeks comfort from Alisha who shatters his illusions about his sexual prowess.

The probation worker, appalling at the best of times, hits on Melissa, looking at her tits instead of her face when he’s speaking to her. Clearly suffering from entitlement issues, the probation worker tries to pick Melissa up, claiming “I’m only being friendly” as if Melissa’s right to peace, safety and freedom is secondary to his pursuit of her.

Worse, Melissa’s coach hits on her, slips a drug into her drink at a party and tries to rape her.

Along the lines of classic Dating the Enemy body-swap stories with the body-swap trope replaced with a gender-bending character, Curtis’s growth in this story is charming and remarkable. It’s tragic that his experience supersedes the women’s, whose stories remain secondary to the male character. Never let it be forgotten that Curtis is, at heart and in the heart of the writers, a male character, retaining center-stage.

Overall, this is the best Misfits story I’ve seen in some time, lending hope for the coming season.