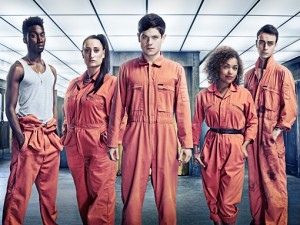 A strange guy – Rudy Wade – fights with a doppelganger on a roof until they roll off the edge, plummeting to their… sore backs, one floor below. Rudy absorbs his whiny friend before meeting two silent girls, the trio wearing ASBO orange while Rudy declaims his innocence.

At the close of season 2, Nathan met a pregnant woman and fell in love – in one episode – taking mother and new-born to Vegas to rip off some casinos. As you do.

The remainder of the Misfits crew – Curtis, Simon, Alisha and Kelly – have completed their community service so they start to live their lives while a new crew wear orange because orange is the new black. (Yes, I went there. I blame the minion. I have been contaminated. Send help. Wear hazmat suits for protection.)

Rudy centers in this episode, suffering from ‘new companion’ syndrome like in Classic Who. He’s obnoxious, repugnant and revolting, a caricature of Nathan’s worst traits without any redeeming qualities except when he splits in two. Rudy’s emergent shadow is his insecure conscience of which there is no sign when the two are one.

Hitting on his fellow probationers, Rudy’s lines and attitudes would get him a smackdown from any self-respecting female and yet both probationers want him. WHY?

After fucking the less sulky one, Rudy obsesses about having found a girl who ‘likes it up the arse’. WHY?

Alisha is held to account for having previously fucked Rudy then ignoring him, as if it’s Rudy’s RIGHT to be Alisha’s boyfriend after a one-night stand. Although I’m not in favor of promiscuity, this smacks of friendzone-declaiming entitlement issues. Alisha accepts blame and none of her friends rise to her defense other than Simon who says he isn’t interested in hearing this. Seriously? NO.

With no-one giving Rudy a smackdown and Alisha accepting blame, this episode seemed a misogynist’s dream.

Kelly tries to get a job as a rocket scientist only to be forcibly ejected from the interview while the interviewer retained her plans and yet she didn’t report the theft. Although she could demonstrate her abilities in a live testing situation, there’s no hint of such intelligence forthcoming in the series. Kelly having this ability is a joke. I hope Misfits takes this somewhere and doesn’t continue to denigrate Kelly for cheap laughs.

Kelly returns – repeatedly – to the magical power man. He won’t give her a better power or help her use it. He won’t help the Misfits crew deal with a rogue power-user who is threatening safety and even lives. Dude reeks of love-interest-syndrome.

First season passed the Bechdel Test before Mistfits slid downhill, reducing the women to love interests, eye candy and plot devices revolving around the menz. Obviously no woman can function without guys first and foremost in her mind.

I was so disappointed with this as the 1st episode of the 3rd season that it took me a while to watch the next episode. The next episode is MUCH better.

I want to know who the creative genius is that decided to call Misfits episodes by their numbers only? They don’t even have titles on IMDB!