The three panels I attended on the Monday were Misappropriations, Dystopias and F**king knights, in between wandering around, talking to people, and sitting in the bar before wending my weary way home to sleep.

Jason Franks, Nalini Haynes, N K Jemisin and Stephanie Lai with David Witteveen as moderator discussed “How should you approach the portrayal of cultures other than your own? What should be avoided? Who does it well?”

I’m not sure that we answered all the questions. It was more a discussion of specific examples of problems. First off, David asked us why we like the multiculturalism of science fiction.

Stephanie talked about being one of three people who are writing Malaysian steampunk at this point in time. Nora talked about writing a black person as a sun character and a white person as a moon character – I totally agree with that; it’s much safer for me to walk outside at night due to sunburn (not safer from human threats, obviously). I prompted Nora to share about Air New Zealand, a public airline with double standards:

[the airline] has used tattooed All Blacks and singer Gin Wigmore in its advertising, while koru – a stylised NZ fern – are used in its logo

So the airline uses Maori culture to promote itself while leaving Maoris unemployed for having ta moko (Maori cultural tattoos).

Raceface promptly rose to the surface, as did the balancing act between a concern for cultural misappropriation and needing white people – including straight white men – to write about characters that are different in order to build diversity in the genre.

Fairly shortly after that, Stephanie led the way with a rant about Windup Girl and how it is culturally disrespectful. After Steph wound down, I said I loved Windup Girl. I went on to explain that Emiko is disabled, that there are so few disabled people in science fiction and fantasy, that Emiko’s experience of being controlled by others, disempowered and abused is quite common for people with disabilities, especially women with disabilities. I also pointed out that Emiko was not fixed during the novel.

Steph and Nora argued that if most people do not read Emiko as disabled then people with disabilities are still invisible; I’m curious as to whether any other persons with disabilities interpreted Windup Girl the way I did?

I argued that when you have nothing, you accept the crumbs from the table; Windup Girl is a comparative feast.

The conversation moved back to discussions of race, engaging with the audience, answering questions. The summary included everyone on the panel making one or two brief points about what to watch out for when writing other cultures. Research was a definite key cited by Nora and confirmed by everyone. I said something about consulting with the relevant people group: for example, if you’re going to write Indigenous Australians, consult with the particular people group you’re writing about.

I added that if you’re going to write an albino villain who is insane I will hunt you down.

Two people came up to me afterwards assuring me that THEIR albino villains will be intelligent. I’m sure they thought they were funny, but seriously? Would you make short jokes at Peter Dinklage? I guess some people would.

I’ve posted this separately over here to facilitate further discussion, with some added discussion on disability and albinism.

Rise of the Dystopia

This is one of the many times I wish I’d sat in the panel with a recording device or at least taken notes.

Gene Roddenberry wrote a rule book for Star Trek where technology was never allowed to be the problem, with a warm glowy future that really doesn’t reflect human nature. This restricted content and tropes until Roddenberry loosened his hold; later spin off series’ stories became more diverse.

YA dystopian fiction was raised including, of course, the Hunger Games. Focusing on dystopian fiction within the YA genre, discussion explored the trope of a unique person engaging others to change the world as an outworking of the disconnect teenagers can feel between themselves, other generations and society in general. Someone said high school is a dystopia, with staff detrimentally impacting upon students as well as the student pecking order. One panelist took that comment personally, warming discussion.

[OMG the spell-checker wants to change ‘dystopia’ to ‘topiary’!]

The climate change trope was explored, with mention of technology being the cause of our environmental problems.

Jay Kristoff’s novel Stormdancer is set in an alternate reality using the environmental catastrophe trope, but Jay was remarkably restrained. I think the topic of alternate realities or histories might have been brushed against but wasn’t a major point of discussion.

Russell makes a great moderator but I wonder how much more he would have contributed if he hadn’t been a facilitator?

F*** Your Knight and the Horse He Rode In On

Medieval European fantasy has been done to death. Richard talked about the sameness of forests after a while – there’s only so much that can happen. The tropes in medieval fantasy were lightly covered including mention of the farmboy (ordinary life), finding the MacGuffin of Power and taking it to the Place yadda yadda. (Don’t get me wrong, I enjoy a good traditional fantasy but I also like variety in my diet.)

The more interesting portion of this discussion was when the authors covered some of their alternatives: Richard with his urban fantasy, Nora with her more Middle Eastern setting, Jason with the Australian landscape, Jane with Mage’s Heart sitting in front of her in hardcover edition (very drool-worthy) and Tor talking about her romances and recent shift in writing.

I didn’t take notes during the panels and now I’m a bit sorry: some very interesting discussions were had but I wanted to enjoy the convention and not feel that I was working the entire weekend.

The authors who spoke on panels were interesting, some of whom inspired me to want to read them – when my TBR pile is a little less threatening. I’m personally very interested in discussions dissecting fantasy, dystopia and the like, so please feel free to use comments below to discuss the topics, add bits I’ve missed, recommend further reading, whatever.

If you’re inspired to write a guest blog about any of these topics, I’m interested in hearing from you. Just remember: Dark Matter does not pay for submissions. Heaps of Kudos but no ca$h. 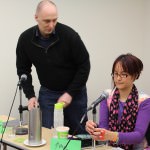 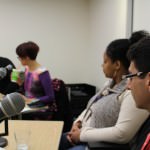 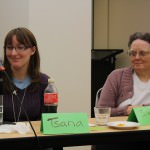 Tsana Dolichva and Sue Burstynski facing the Rise of the Dystopia 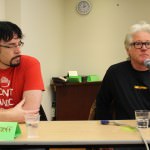 Jay Kristoff and Russell Blackford face the Rise of the Dystopia 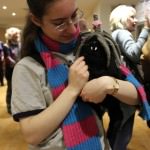 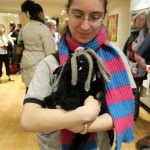 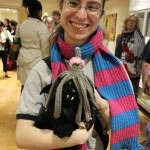 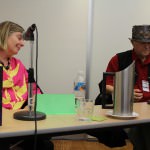 Jane Routley and Richard Harland about to “F*** your knight and the horse he rode in on.” 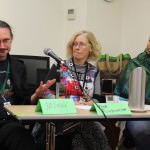 Jason Nahrung and Tor Roxburg about to “F*** your knight and the horse he rode in on.”