Mirror, Mirror: What if the Evil Queen poisoned the prince?

Following her beloved mother’s death, the kingdom falls into the hands of Snow White’s stepmother, commonly referred to as “the Evil Queen” by those she rules. Snow keeps her head down at the castle trying to make the best of her situation. However, when new information about her parents resurfaces and a plot to kill her goes haywire, everything changes for Snow. With the help of a group of wary dwarfs, a kind prince she thought she’d never see again and a mysterious stranger from her past, Snow embarks on a quest to stop the Evil Queen and take back her kingdom. But can she stop an enemy who knows her every move and will stop at nothing to retain her power including going after the ones Snow loves? Only reading this twisted tale will tell you the answer!

Growing up I was a big Disney fan and have really enjoyed introducing the stories and characters to my two bookworms. Snow White is one of their favorite fairy tale characters. This made me very keen to read Mirror, Mirror. The beginning of the book did a fantastic job of capturing my attention. The prologue was exciting and made me instantly want to read on. As I continued, I was not disappointed.

This tale is told in alternating third-person perspectives, one being Snow White’s, and the other being Ingrid’s (the Evil Queen’s).

Snow White is traditionally a little bland. Like all other versions she is goodness personified, never has a bad thought, animals flock to her and strangers adore her. However, Calonita’s Snow White is also intelligent and independent and this works well. I enjoyed this part of her character: it shows a young woman who is capable of defending and standing up for herself without over reliance on others. This is the kind of protagonist I am happy to read about to my daughters.

I really enjoyed Ingrid, the ‘Evil Queen’. She is everything a villain should be but Calonita has added a greater depth and complexity to the original character. I loved reading the story from Ingrid’s perspective, particularly the flashbacks. Flashbacks reveal the hardships Ingrid experienced that shaped her character. The flashbacks also provide a valuable insight into her relationship with the mirror and the influence the mirror has on her. It makes her more than just being evil and cruel. It makes her complicated, layered and even somehow vulnerable and understandable. Well done Calonita for creating a complex character who left me with very mixed emotions. 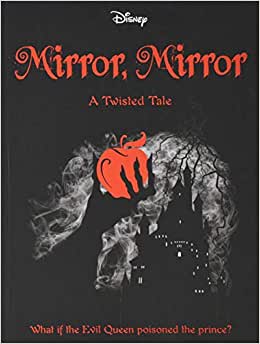 Calonita’s retelling, Mirror Mirror, puts a truly unique spin on the classic Snow White tale. It is a more modern take on jealousy, love and happy ever after. It is a novel that draws you in from the beginning and has characters that leave your emotions in a bit of a jumble. I enjoyed the story and will be sharing this with my two bookworms. I will be excited to read more in the Disney Twisted Tale series so watch this space for further twisted reviews.